Both the Knysna and Plett hospitals are still closed. Drone footage has captured the aftermath of the devastating fires that have been sweeping through the Southern Cape, particularly in Knysna, Plettenberg Bay and Bitou.

The drone footage, uploaded to YouTube by TimesLIVE, shows the blackened landscape along the Garden Route’s coastline, starting in Plettenberg Bay, then moving on to Knysna.

Further on Monday morning, it was reported by the Knysna-Plett Herald that the fires that spread from Pezula to Noetzie and Hornlee were contained.

The Sedgefield fires were completely under control, thanks to the combined efforts between ground and aerial resources.

Water bombing and all evacuation warnings had been rescinded.

One house was lost in Brenton due to flareups.

The fire in Concordia has been contained.

The N2 has been reopened.

The communication team, together with the police, verified that the media statements with regards to the hijacking of trucks used to deliver humanitarian support were not true.

There was an increase in the number of patients reporting at the mobile medical unit. Between Gift of the Givers and the EMS, the capacity increased. Emergency staff are being relieved with staff from Oudtshoorn.

The Brackenridge community in Bitou was evacuated on Sunday as a precautionary measure due to the fire in Jakkalskraal and Roodefontein. The fire was still raging at Kransbos area.

Residents wanting to report damage to property after the fires, can fill in a survey, set up by the Knysna Municipality.

The Relief Management Team will capture the details onto the official database to process.

Alternatively, residents may register at the Knysna Municipal Finance Building in  Clyde Street.

Extent of damage at last tally

During a media briefing on Sunday, executive mayor of Knysna Eleanore Bouw-Spies, said for rebuilding purposes, there was a Knysna checklist that would be used to assess who was affected, what and where their needs were.

She said that supplies needed most at present were sleeping bags, mattresses, blankets, small home appliances and toiletries, among others, and she reiterated the importance that people do not spread rumours and fake news.

The acting municipal manager Johnny Douglas said the total loss to Knysna had not yet been determined, but at the last tally, which only included 5% of Knysna, 439 properties in town had been affected.
“We will continue to assess the damage tomorrow,” he said.
Knysna and Plett hospitals still closed 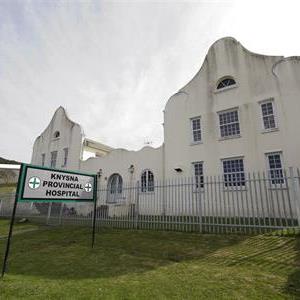 According to the Knysna-Plett Herald, the last 48 hours have been very challenging for the Western Cape department of health with facilities the victim to a severe storm and raging fires in the Knysna area.

As a result of this fire, several primary healthcare facilities in the Knysna/Bitou area were forced to close down, and the hospital was evacuated.

The cooperation between multiple role players came to the fore as 82 patients were safely evacuated. Staff were also deployed to these sites to ensure our patients continue to receive the necessary medical care they required.

All PHC facilities are open and rendering services, although some with limited staff. Kwanokuthula CDC is rendering a 24-hour service at the moment.

“We thank everyone for their role in ensuring our patients, the most vulnerable, were brought to safety and cared for as it speaks volumes about our journey towards adding more public value,” said Ferreira.