The EFF leader was addressing the attendees of the party's Youth Day rally at the Boipatong stadium which was packed to the rafters with supporters. 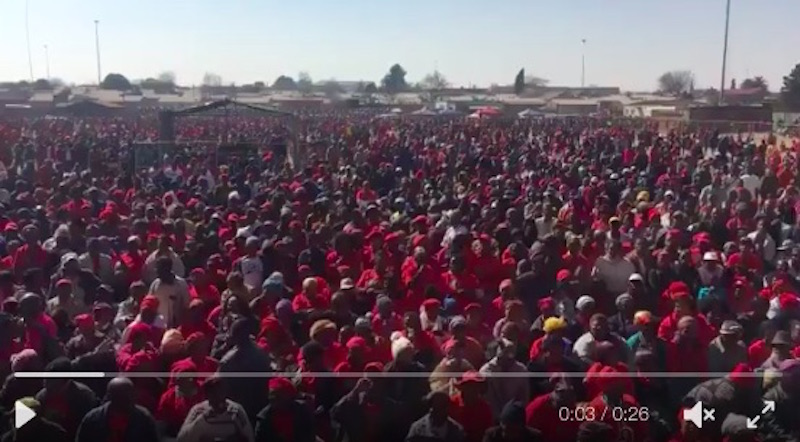 Malema was delivering his keynote Youth Day speeh in Boipatong, near Sharpeville.

He said young people do not need permission from their parents to fight the rot called corruption.

“We are fighting our own struggle and children of 1976 were not disrespectful but they fought because their parents then said there was nothing they could do to end apartheid,” he said.

Malema said it looked as though they were disrespecting the current situation. He spoke out against the bad situation that Boipatong township was in and he urged the youth to stand up and say, “We are going to fight”.

“We are not ashamed by community-led protests and we will be with you all the way because there is a lot of money in the municipality.

“Simon Mofokeng is someone who eats our money and spend our money on alcohol… Mofokeng, your days are numbered, ” Malema said.

He stressed that the government of the EFF was ready and prepared to take over Gauteng. “We are here to pick up the spear and we want to say to the ancestors of Boipatong, ‘Don’t turn in your graves… You fought a good fight and we are ready to take over from where you left off,'” Malema said. 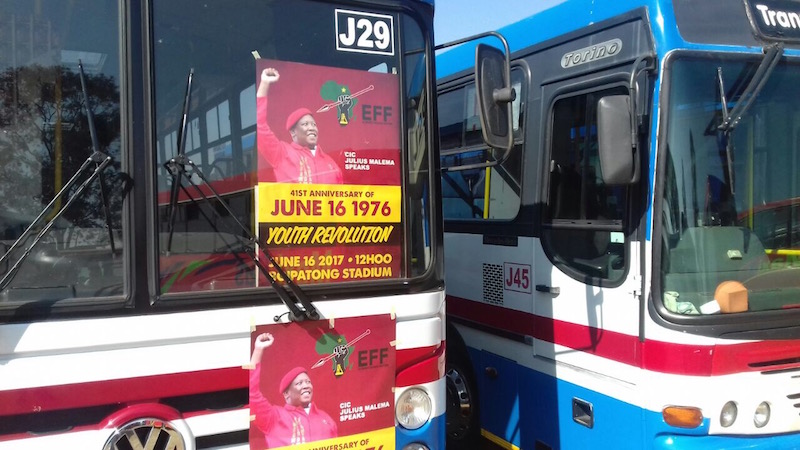 The EFF’s supporters were transported in buses from different parts of Gauteng. Picture: Steven Tau

Matters of the economy

Malema further told attendees, “Stop being consumers… Be the owners of the economy.” He added the EFF wanted the people of South Africa to own factories.

“Every township built by the ANC has a mall… These people of the ANC took over government but they don’t know what to do with the economy. Working at a mall only means being a shopkeeper,” he said to a resounding applause from residents.

He said the EFF did not want ANC mascots working for the ANC, stressing that all children must all go to school for free.

He said economic freedom would not be attained without education. Malema said education brings confidence and dignity.

“When ‘fees must fall’ students fight for free education, they are being accused of damaging property whereas they are trying to force open the doors to free tertiary education,” said Malema.

EFF to continue to vote with DA or IFP

Malema also accused the ANC of forgetting the people who voted them into power. “Shame on you ANC. Shame on you Jacob Zuma and Blade Nzimande,” he said.

Malema said no child must sleep in a library or a toilet, saying it was the ANC that has allowed universities to be experiencing challenges, particularly for the lack of accommodation.

Malema said if people don’t see the light in the EFF,  then they are permanently lost.

Malema said the problem of Tshwane and Johannesburg was brought by the ANC. He stressed they will continue to vote with the DA or IFP and other opposition parties.

“If you are an agent of Zuma, go to Nkandla. We don’t owe Zille an apology… I was happy when Mmusi Maimane told Zille said they sit here and then she apologised,” Malema said.

He turned his attention to Zuma and the ANC, saying the ruling party failed to discipline Zuma the same way Maimane did with Zille. The local Boipatong stadium was packed to the rafters with EFF supporters. Picture: Steven Tau

The party’s supporters were transported in buses from different parts of Gauteng, while other buses from Mpumalanga were also spotted in the area.

The venue where Malema spoke at has, for the past couple of weeks, been gripped by service delivery protests.

The area in question falls under the Emfuleni local municipality which is led by mayor Simon Mofokeng, who also made headlines recently for a the wrong reasons. It is alleged the mayor spent millions of rand on hotels as well as at fast food outlets, such as KFC and Nandos. Mofokeng has since refuted the claims.

Meanwhile, the local Boipatong stadium was packed to the rafters with EFF supporters dressed in their famous red colours chanting slogans like “Zuma must fall” and “Down Simon Mofokeng”.