NUM appeals after mine ‘fires 2 000’ workers

Their dismissal was due to an alleged unprotected strike. The National Union of Mineworkers (NUM) has lodged a formal appeal after the dismissal of nearly 2 000 miners by Sibanye Gold Mine at its Cooke operation in Westonaria.

NUM president Piet Matosa said the appeal process against the dismissal of union members would start today at the mine.

Their dismissal was due to an alleged unprotected strike, supposedly spearheaded by the Association of Mineworkers and Construction Union (Amcu), following the reduction of food supply by the employer for the underground workers.

Sibanye’s spokesperson, James Wellsted, said the intention to reduce food supply for the underground miners was to eliminate illegal mining activities at the mine. It is alleged most workers lodged a complaint that illegal miners were demanding food from them. Currently, 359 illegal miners have been arrested, said Wellsted.

The strike resulted in the injury of NUM’s members and four were hospitalised due to attacks by angry strikers.

Matosa said: “We were informed by the employer that 2 000 workers have been dismissed. We have 1 100 members and we are going to appeal the unfair dismissal.”

He added: “Our members stayed away from work for fear of their lives. For 16 people to be injured on their way to work, shows that there was violence. It is the employers’ duty to protect the workers. We are appealing against the unfair dismissal of our members because they were not part of the strike.”

He condemned violence during strikes and said: “Life is a gift from God and it should be respected.” However, Wellsted said out of 3 800 workers at Cooke operations, only 1 514 were dismissed and that 700 are NUM members and 500 from Amcu.

Wellsted confirmed the appeals were ongoing and the 1 514 dismissed workers will have to give compelling reasons for engaging in an unprotected strike. Others should give clarity for failure to report for duty, he said, adding that many workers had reported for duty during the strike.

NUM shifted the blame to Amcu, alleging they lured the workers to engage on an illegal strike. Amcu’s spokesperson, Manzini Zungu, referred all questions to the union’s general secretary, Jeff Mphahlele. However he was unavailable for comment.

Another court turn in Amcu leader tussle
6 days ago
6 days ago
PREMIUM! 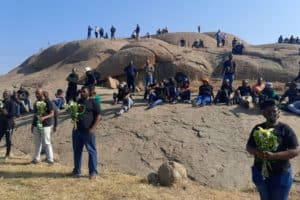 Another court turn in Amcu leader tussle
6 days ago
6 days ago
PREMIUM!