The public protector report details how R240m was paid for work that was done poorly. 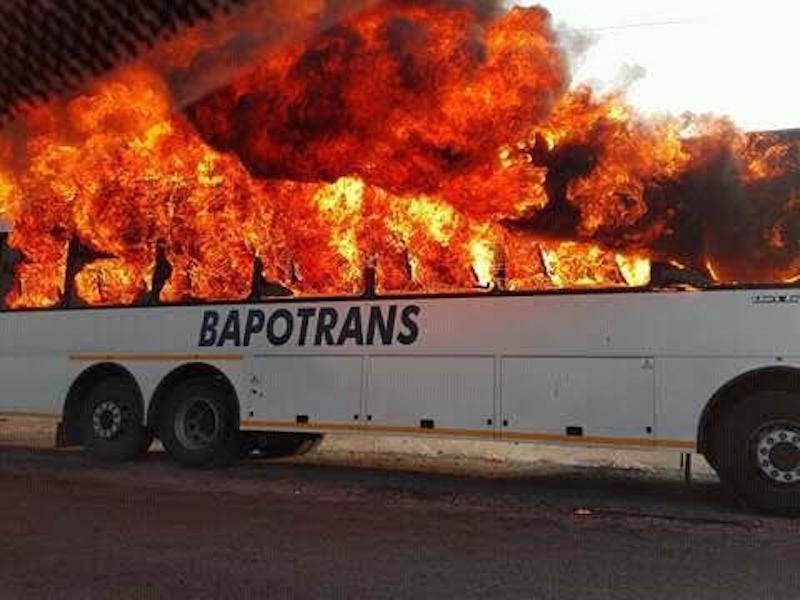 A bus was set alight in Bapong near Brits in North West during a protest related to employment at Lonmin mines Photo: Supplied.

A total of 12 companies, majority of whom are doing business in the built-environment sector, are liable to reimburse a total amount of R240 million back to the “D account” held in trust by the provincial department of local government and traditional affairs if Mkhwebane’s findings are not taken on judicial review.

The Bapo ba Mogale tribal authority includes areas such as Marikana, where Lonmin is based. The tribal authority, led by Kgosi Kgomotso Morate, contains one of the world’s richest platinum and chrome reserves.

Members of the community, including royal council members, lodged the complaint in 2012, accusing the now-defunct traditional council and provincial government of squandering monies held in the D Account by processing payments to service providers for work never executed.

Tenders and contracts were issued for construction of a “palace complex”, “trunk roads”, “marketing and communications services that included developing strategic plans, design and layout of annual report”, “review of mining activities”, ”implementation of enterprise resources planning system” and “construction of a multipurpose centre”.

The premier has now been given two months, during which he should “initiate a process”, in conjunction with a special investigation unit, to recoup various amounts of money from different companies.

The biggest financial maladministration line item is allegedly “the irregular payment of an amount of R78 863.73 million paid from Nhluvuko Civil Works on the construction of the Palace complex”.

Next in line is “R36.3 million [paid] to Matlapa construction consulting when it was evident there was no value of money in running the project”.

ProjexConsult was allegedly paid R8 705 233.85 million for “construction of the palace complex”, Madisa and Associates was paid R3.7 million for communications, which included producing an annual plan, and Mosiamise business consulting received R5.1 million for a review exercise that was never done.

Other payments meant for work the investigation could not find proof of include “R4 052 328.72 million paid to Dire Accounting Practice” for an accounting system, “R8 098.81 million from Thaba consulting engineers for the construction of multipurpose Centre for poor workmanship”.