Cape York: a hijacked building where it is alleged anything illegal is possible

A trolley pusher talks about life in a hijacked building in downtown Joburg. 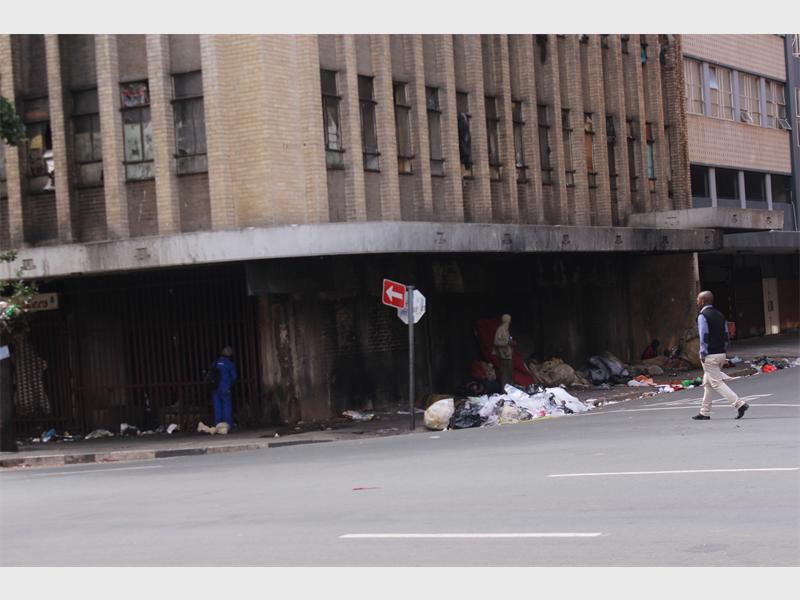 The street level of Cape York where some of the homeless live. Picture: City Buzz

Johannesburg Emergency Management Services are still busy with search and rescue operations following a devastating fire in the Cape York building this morning.

In February, City Buzz reported that while the name, Cape York, gives the impression of being named after two famous, world-class cities, Cape Town and New York, it is a name belonging to a sprawling hijacked building in downtown Johannesburg.

Cape York holds its own, not only in the name it boasts, but in the expressly noticeable, far-reaching stench that extends from within its walls out into the immediate surrounds of Jeppe and Goud streets.

“A Tanzanian drug dealer called Ndoza runs the building,” alleged Kgotso Sila, 29, also known as Shege, a trolley pusher who originally hails from Witbank in Mpumalanga and has lived inside the derelict Cape York for the past 20 months.

“It is mostly foreigners like Tanzanians who live here. A number of families live inside, mothers with their children and so forth. I can liken [the inside of the building] to the slums of Alex.”

With saliva drooling from his mouth, Shege describes the undesirable course of life found inside Cape York.

“You can get killed inside the building and no one will stand for you. There are no rules to be followed,” he said.

“I’ve seen at least five dead bodies since I started staying here; three men and two women. Bodies can lie undetected for three or four months, save for when there’s a pungent odour.

“Ndoza and his cronies do not allow us to buy food outside, we’re only allowed to buy food from inside. You’d be surprised, but there are things lik

e spaza shops in there; people who trade as hawkers as well as prostitutes who charge R10 or R15 for sex. There are [also] so many of us that we occupy many different rooms and sleep on the floor in rows.”

According to Shege, Ndoza is a prolific drug lord whose “claim to riches” is his drug operation within Cape York. Nyaope and marijuana can be obtained from Ndoza’s mules at an undisclosed price. Shege further alleges that all kinds of weapons can be obtained as well.

“You can get pretty much anything inside this building. People enter the building with knives, machetes, guns and so on.”

Shege alleged: “Cops are scared of coming in there because it’s dark and they fear for their lives.”

The trolley pusher, who disclosed that he’s lived in a number of hijacked buildings in town, normally stations himself at the Noord Street taxi rank to help commuters transport their belongings and direct them to taxis in an attempt to eke out a living.

“I used to rob people as well but stopped after I encountered a bad experience with a sangoma – an African traditional healer. An accomplice and I attempted to rob him only for him to retaliate, hitting me with a bag which contained a number of hard objects, which we later discovered were bones. We sold those off to another sangoma at the Faraday taxi rank.”

He casually alludes to a shooting incident that occurred just after 6am on January 31 in Goud Street. “A guy was shot while trying to run into Cape York after he [allegedly] grabbed a woman’s handbag,” he said.

He describes hearing gunshots as he was trying to sleep in the building and ran outside to see what was happening. He claims to have instantly recognised the man who had been shot and was dead.

“Unaware to the assailant [the dead man], the woman’s male accomplice was trailing behind on foot when he made for her handbag. Her male companion saw this, pulled out his gun and shot five times, hitting the [thief] three times in the back.

“I recognised his face immediately. He was a Tanzanian guy who lived inside Cape York. He was a seasoned, petty criminal whose luck had simply run out that day.”

This timid trolley pusher indicated that as much as this is his current reality, he hopes to eventually forge a way out. “If I can stop smoking nyaope and return to Witbank where I have older siblings, go back to school and finish my Islamic education, I feel I would have done justice for myself.”

Cele to unrest inquiry: I don't recall seeing top cop Sitole in the 'right places'
18 hours ago
18 hours ago

Cele to unrest inquiry: I don't recall seeing top cop Sitole in the 'right places'
18 hours ago
18 hours ago