Blade Nzimande: ‘My wife says ANN7 is an intelligence report’

Nzimande says the Guptas are running a shadow parallel state with the help of captured state security organs. 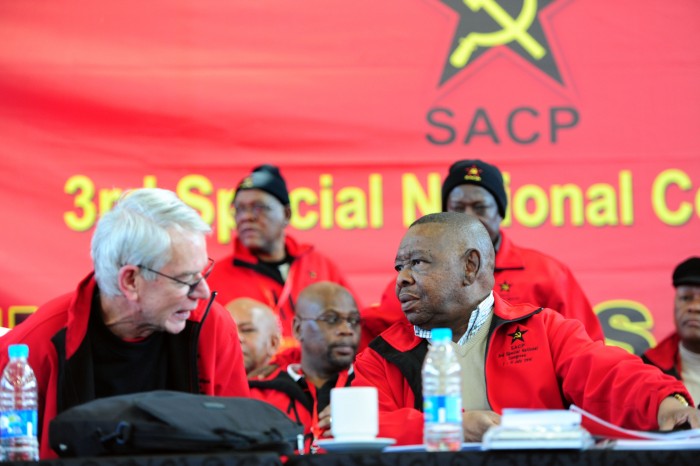 Nzimande lashed out at the Gupta family for hijacking state security organs and spying on those opposed to state capture. He reminded delegates: “We [SACP leaders] have been complaining that we are being listened to. Maybe we need to boost our own capacity to gather information as the SACP.”

“This parallel state, with bogus Cabinet memorandums, advisers from outside the state and growing authoritarianism. Cde Gwede [Mantashe] and Jessie [Duarte], do we have a state? ANN7 is a joke … unkosikazi wawi [my wife] says it’s an intelligence report,” he said.

“It is an open secret admitted by itself [ANC] that our leading partner in the alliance is threatened by serious decline, money patronage and state capture, as per the report of the secretary-general [Gwede Mantashe] at the policy conference.

“A work of a parasitic capitalist has created a silent coup. Don’t come and tell us we have done nothing about monopoly capitalism. We did not start calling for transformation of banks when Gupta accounts were closed down. The Guptas are not the answer to white monopoly capital [problems],” Nzimande said.

Arguing that the Guptas and white monopoly capital were “two sides of the same coin”, Nzimande said SACP leaders were “preoccupied with the family [Guptas]” because if state-owned enterprises were to be weakened, “you would have no weapon to roll back the power of monopoly capital”.

He said those creating an enabling environment for state capture should take responsibility, as there was “mutual dependence between the parasites and factions in our organisation”.

“We must never give up the fight against these pathological developments. We appreciate the stance by some of the ANC MPs. If those MPs did not stand straight, we would still have this rot at SABC. We call on those MPs to continue that work to keep the ANC flag flying high,” he said.

He said a “national democratic revolution” still held real and relevant meaning despite facing challenges that could be traced back to the Polokwane elective conference, where a “marriage of convenience” took place, with one faction seeking “to replace the other with their own cadres”.