The group claims it has been living on the land, given to them by a farmer, for 30 years. 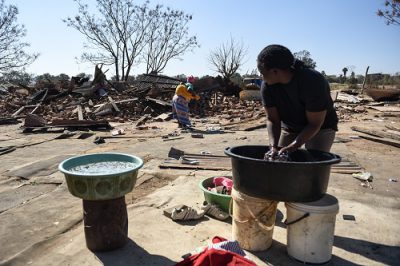 A resident of a small farm in Capital Park washes clothing outside what was once her home, residents had been living on this land since 1987 and had recently been evicted by the red ants, during the eviction their homes and belongings were destroyed and they have not yet been relocated to new homes, 16 July 2017, Pretoria. Picture: Jacques Nelles

A total of 48 Pretoria families were allegedly thrown out of their houses like “dogs”, had their homes bulldozed and their few belongings taken by the Red Ants after they were evicted from land they claim rightfully belongs to them.

The families had been living on the land in Behrens Street, in Capital Park, Pretoria, for 30 years and said it was given to them by the first rightful owner, Johannes Adriaan Charlie, a Portuguese vegetable farmer whom they worked for until he died in 2005. The families are now cramped into two small tents which were provided after the Economic Freedom Fighters (EFF) stepped in.

Mothers and children sleep in the tents at night and the men sleep outside in the cold.

“They threw us out like we are rubbish. The Red Ants took our food money, cellphones, school uniforms, medication, birth certificates, furniture, clothes, blankets and cutlery. They took everything and we have nothing, not even buckets to collect water in,” said Shadrack Monyebodi, spokesperson for the families.

He said his mother and all the older people moved onto the land in 1987.

“Our parents worked for the original owner on this vegetable farm for many years. Long before he died, he said this land belongs to them and that they can stay here with their families forever. He helped our parents build houses and supplied bricks and building material and said they could farm vegetables and sell them to generate an income,” Monyebodi said.

Some of their neighbours have been helping them with food since Thursday, but it is not enough.

“Our children are sick and getting worse because the Red Ants also took their medication. We don’t have money to go to the clinic in Hercules,” Monyebodi said.

EFF member Joyce Leope, chairperson of ward 68, under which the land falls, said they are going to take this case to court.

“The owner gave the land to the magogos. He gave them a title deed and he told his children never to move those people from that land. Now, 12 years later, all of a sudden there are new owners who rush to evict these people. They want to hijack the farm from them,” Leope said.

MMC for human settlements Mandla Nkomo told The Citizen the land belongs to a consortium of private owners, who obtained an eviction order against the families.

“They have to comply with the order, which is to provide a place to stay for these families. “We can’t provide them with sanitation and water while they are living on this private land, because we would be acting against the court order,” Nkomo said.

He said the City had offered the people accommodation in Lotus Gardens, west of Pretoria, in containers, but they refused.

“We asked the owners if they would extend the eviction order, but they said if they did the city would have to pay R2.5 million for accommodation and we cannot afford this,” Nkomo said.

EFF disrupted Ramaphosa and Zille's plan to give hung metros to ANC, says Malema
23 hours ago
23 hours ago

EFF disrupted Ramaphosa and Zille's plan to give hung metros to ANC, says Malema
23 hours ago
23 hours ago