MMC for public safety Michael Sun has welcomed plans for the renovation of the hijacked Cape York building by a private owner.

For years, the hijacked Cape York building in Jeppe Street in the Joburg CBD – which made headlines on July 5 after a raging fire claimed the lives of seven people – has been a source of terror for residents and the city at large, and is one of about 85 such buildings in the inner city.

This is according to the City Buzz, which further reported that, according to reports, a similar incident occurred when a fire broke out in the building in 2013, killing four people, including a one-year-old child.

Following the latest incident, preliminary investigations by the Johannesburg Emergency Management Services have concluded that the cause of the fire is undetermined. Witnesses who lived in the building, however, claimed that the fire was the result of a curtain that caught fire during a squabble between occupants.

Cape York has since been declared unsafe, resulting in hundreds of the building’s occupants being displaced. Scores of women and children were, however, transferred to a temporary shelter at the Wembley Stadium in Turffontein on July 8. A number of others still linger outside the building in the hope of being let back inside, however, the owner sealed off the entrance with brick and mortar on July 6. 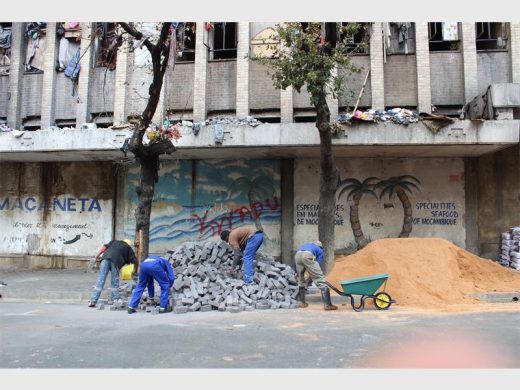 Workers prepare bricks and sand in an effort to seal off the entrance to the hijacked Cape York building in the Johannesburg CBD following a fire that ravaged the building on 5 July. Picture: Tshepiso Mametela

The building reportedly used to house the offices of the Bank of Mozambique before volatile economic conditions forced the bank to close up shop in 2011.

Property developer Jamal Fatto, 45, an Ethiopian national, purchased the Cape York for an estimated R9.2 million from the Bank of Mozambique in 2014. However, for three years, the businessman battled to transform it into a viable residential and retail space.

City Buzz previously reported that since purchasing the property, Fatto struggled to gain control of the building, despite approaching the courts and local government organisations for assistance. “We’ve been stuck since buying the building in 2014. We needed the government of South Africa to help us, but nothing had happened. Even after applying to the courts, I was still not able to secure the building.”

Asked what his reasons were for purchasing a derelict building, Fatto said it was due to its size. He added that construction on the building would be completed in the medium-to-long term. “Cape York will not be what it looks like now after we’ve completed renovations in the next 18 to 24 months,” he indicated.

“This is a huge building – when I bought the building there weren’t as many people living in it. There were probably only 100 people living inside, but that number increased as they made their way from neighbouring hijacked buildings into this one.”

Meanwhile, as a new era approaches for one of the inner city’s most notorious criminal hotspots, the MMC for Public Safety Michael Sun has welcomed plans for the renovation of the hijacked Cape York building by a private owner. This comes after a devastating fire ripped through the building on July 5, resulting in the death of at least seven people, while six were taken to hospital in a stable condition, and one more in a critical condition. The building was declared unsafe by the City of Johannesburg’s disaster management and its occupants subsequently displaced.

“Illegally occupied buildings are not safe in many aspects. Not only is the Cape York building an environmental hazard – like many other abandoned buildings in the inner city, it is a serious fire safety hazard,” Sun told the City Buzz.

“It was found that the building has no escape routes or electricity, during an inspection of the building [in May].”

In light of the provision of alternative accommodation, however, Sun added that a number of women and children had been taken to a temporary shelter at the Wembley Stadium in Turffontein, while others have instead chosen to linger outside the building in vain.

“Some are unwilling to relocate and that’s created some problems for us, however, we are providing emergency shelter just to make it as comfortable as possible for the fire victims.”

“We understand the occupants may have challenges of paying rent to the illegal land occupiers – a lot of the occupiers illegally take occupation of the building then sub-divide them to unsuspecting or even suspecting tenants.

“So there’s a complicated web of legal, human rights, service delivery and safety issues for us. And so we call on private owners to take more control to avoid such incidents.”

In conclusion, Sun said the safety of the residents of the inner city is paramount. “We really want to ensure the safety of residents, but at the same time, we’re asking residents to assist us in ensuring that there’s a safe environment for everybody.”

On Wednesday, illegal squatters were evicted from the Fattis Mansion on Harrison Street near Bank City in Johannesburg CBD.

Once a stylish 12-storey block of flats in the heart of the banking and legal district, the building is now a run-down building with no functioning lights or water which is the home to many.

The eviction was authorised by the Joburg City Council and resulted in three streets being closed off.

Cape York: a hijacked building where it is alleged anything illegal is possible