‘Just pay us, even if it’s in an envelope’, ANN7 employees tell management

Union leaders allegedly told management they can only consider signing a petitition if the company starts complying with SA labour law. 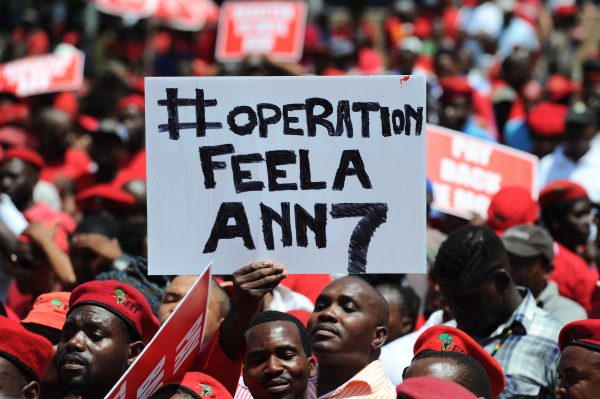 Economic Freedom Fighters (EFF) supporters are seen, 9 February 2016, during the EFF march to the Constitution Hill in Johannesburg. The EFF and the Democratic Alliance went to court to force South African President and ruling ANC leader Jacob Zuma to pay back public money allegedly spent on his home in KwaZulu Natal. The banner reads: "operation feela ANN7". Picture: Michel Bega

The latest decision by India’s Bank of Baroda to close the accounts of Gupta family-owned companies at the end of August has left employees at the Midrand-based broadcaster in a pickle.

In a meeting held on Tuesday, management allegedly confirmed to employees of the station that Bank of Baroda had joined the country’s four major banks in announcing its intention to terminate their business accounts by the end of August.

Employees, almost all of them speaking on condition of anonymity, told The Citizen that whereas they understood the severity of allegations of violating the Financial Intelligence Centre Act as well as money laundering by the family, all they are hoping for is that their salaries should be paid.

The management apparently asked employees to sign a petition, yet to be drafted, asking the Bank of Baroda to keep the family’s business accounts open for them to be able to transfer their salaries in future.

“You know I really don’t care any more what is happening. It is so tiring; all I want is my salary. It could even be in a brown envelope. I could not be bothered. I have financial obligations to meet,” said one disgruntled employee.

“Brown envelope” was a reference to management’s commitment to staff members that, should their efforts to stem the closure of the accounts fail, they will have no other option but to resort to paying employees salaries in envelopes.

“That is something that we will never allow. It is totally against the law and this may open the door for further transgressions, as those salaries have to be cleared by banks for tax and other compliance requirements,” said Clyde Mervin, the president of the Communications Workers’ Union (CWU).

It is understood that shop stewards immediately retaliated against ANN7 management when they pleaded for employees to sign the petition, reminding the mainly Indian senior executives at the company that union members constituted by mainly black South Africans were allegedly made to work strenuously long hours and earned 75% less than their Indian counterparts in similar positions.

Mervin, speaking to The Citizen, explained that his union found it preposterous for the Guptas to use the workers’ plight as a bargaining chip in their fight against the banks.

“It is not the responsibility of the employees to petitition the banks and that is our official position on this.”

He said the CWU was concerned about the devastating impact of the decision on workers, many of them breadwinners. He said this decision may precipitate the winding up of business operations at the station – a situation likely to exacerbate unemployment.

“Let us separate the issues here. The workers have nothing to do with allegations of financial impropriety. The banks must be sensitive, there must reasons why the accounts are closed. If Atul or Rajesh [Gupta] have broken the law, criminal charges must be pressed,” Mervin reiterated.

The CWU is planning to lobby the minister of finance and the SA Reserve Bank to intervene in this latest spat.

In response to the fact that Treasury is seeking a declaratory order from the high court that the minister cannot intervene, Mervin said they would try the option to protect the workers’ interests.