Timol ‘had no injuries’, testifies Jan Rodrigues, last man who saw him alive

Rodrigues insists he had seen no injuries on Timol’s face, head or hands before he fell. 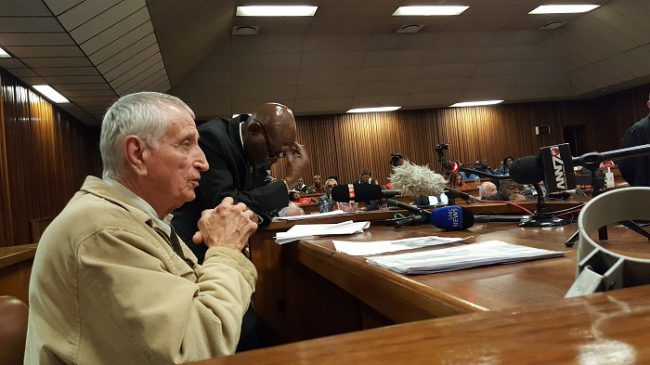 Jan Rodrigues, the last man to see anti-apartheid activist Achmed Timol alive, insists he never saw any injuries on Timol before he allegedly leaped out of a 10th-floor window.

Rodrigues testified in a reopened inquest into Timol’s death, who died while in the custody of the security police in October 1971.

The court earlier heard Rodrigues, a security police clerk, repeated the version he gave at the first inquest that Timol had appeared shocked after an unknown man came into the office, and said three of his compatriots had been arrested, and minutes later suddenly jumped out of the 10th-story window.

According to Rodrigues, two captains who were interrogating Timol had asked him to guard Timol for a few minutes and then went out just before the incident.

He ran out of the office shouting: “Timol had jumped!” immediately after the incident.

Asked how he had known it was Timol, he said one of the officers, Captain Hans Gloy, had told him: “This is Timol. He is a valuable witness.”

He said it appeared to him as if Timol’s body was removed from the scene where he fell as quickly as possible to get it out of the public eye.

Rodrigues said several of his senior officers, including Major-General C Buys, Gloy and Timol’s other interrogator, Captain Faan van Niekerk, had tried to pressure him to change his statement to say there had been a physical struggle between him and Timol, but he refused.

He said he had not revealed this in the first inquest because all of the officers were in court when he testified. They were a very strong team with a lot of influence, and they could have caused him serious harm, even possibly physical harm.

Asked by Judge Billy Mothle why he had waited since 1972 to reveal this information, Rodrigues said he did have the opportunity before, and did not know why.

He insisted he had seen no injuries on Timol’s face, head or hands, and said the rest of his body was covered by his clothing. He did not see if Timol was limping before he jumped.

Forensic pathologist Prof Steve Naidoo earlier testified that 27 of Timol’s 35 injuries could have been caused by his fall. These included a dislocated ankle, a fracture on the top of his skull and an injury under his arm.

Confronted with a 1971 police photo showing him standing next to the window, which he pointed out as the spot where he had stood when Timol fell, Rodrigues said the photographer “had shown him where to stand”.

He revealed for the first time yesterday that had “instinctively tried to dive” or “stretched out his hand” to stop Timol, but tripped over a chair, by which time Timol “was gone”.

Prosecutor Dr Torie Pretorius put it to him that it was highly improbable that a big strong man like him could not stop Timol, to which he replied: “I’m describing it as best as I can.”

Rodrigues often cited a poor memory of the events, which he said he could not remember in detail because it was such a long time ago, and he was now 78 years old.

He revealed he went to work as a journalist for an Afrikaans newspaper when he left the police shortly after the conclusion of the inquest because he felt he would not get further promotions.

Afterwards, he briefly returned to the police for advance training (which could have been counter-insurgency training) because the country was “in a state of war” at the time, and he wanted training “for defence and attack” against the “total onslaught”, but afterwards went back to his job at the newspaper.