According to a report, it is thought somebody started the fires, but it could not be said that the fires were deliberately started. 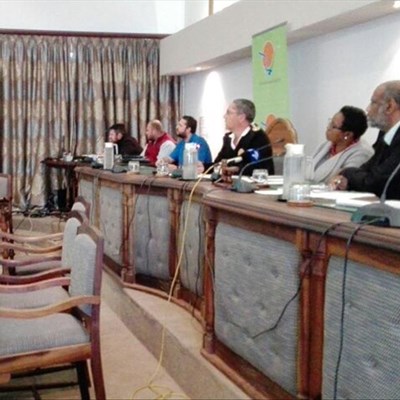 The meeting is under way in the council chambers. Picture: Knysna-Plett Herald

The cause of the fires that ravaged the Knysna and Plettenberg Bay areas in June was most likely human activity, reports the Knysna-Plett Herald.

The fires then spread due to other factors, including weather patterns.

This was heard on Monday afternoon during a report back meeting about the devastating fires that started on June 7. The meeting was held in the Knysna Municipality council chambers.

In a statement released by Knysna Municipality, Knysna municipal fire chief Clinton Manuel was quoted as saying: “Evidence further shows that it is this fire that spread due to the weather patterns of 7 June. I can confirm that the cause of the fire being an Act of God is dispelled.

“We cannot say that this fire was started as a criminal act of arson, in other words, deliberately. This investigation and conclusion is up to the South African Police Services.”

During the report back meeting, municipal manager Kam Chetty recapped the findings of the Knysna fire.

“Clearly there’s a clearing.” This is in the Elandskraal area.

“Why do we say so? A, because we have seen access roads to that particular point and we’ve seen fires there. The origin of that particular fire, you can see, the material that was brought in was foreign material.”

Earlier, Manuel had said there was no evidence of pine trees in the clearing or near that area, although pine cones were found. He said it was known that pine cones could be used as firelighters. He said the inclusions of the pine cones in the area, as well as heavy logs that were stacked which probably shows to have been used to start a fire, could only have got there by humans.

In describing wild fires he said: “They first ignite light fuels and then spread to heavy fuels. That is very very evident in that clearing at the bottom.” He considered the pine cones and stacked wood found in the area as the heavy fuels and not as leaf litter. He said a wild fire then forms a distinctive “V” pattern and there was an area that showed that too.

Manuel said: “Having applied the scientific method of investigating this fire, the origin I find is in that ‘V shape area’ where there is a clear ‘V’ pattern in that area. I also know that first ignition point occurred in that clearing and I want to put it down the smoking gun being the pine cone, together with the stacked wood around it.

“Somebody probably made a fire down at the bottom there.”

Chetty said this foreign material was consistent with “some kind of human activity” used to start fires.

“The last thing is that if we look at … the thermal wave and the patterns … the topographical scarring pattern, combined together with the weather patterns, we can now postulate exactly how the fire started and we can model how it spread from there into Knysna, with the wind patterns at different hours,” said Chetty.

Seven people died and hundreds were left homeless after their homes were razed to the ground during the devastating fires.

Manuel explained the first fire responded to was in Kruisfontein, and he said it was also man-made. He said they found evidence of someone sleeping in the bush there. This is the fire that eventually spread to Plettenberg Bay and then, on June 8, the wind changed direction and the fire spread to Pezula and Noetzie.

“What we do know now is that the Elandskraal fire was first ignited but it was reported a lot later in comparison to the Kruisfontein fire which started later but was reported earlier,” said Manuel.

In a video clip posted by the Knysna-Plett Herald of the report back meeting, Knysna executive mayor, Eleanore Bouw-Spies said: “The closest South African fires that comes near to what we have experienced was the 2015 Cape Town fires.”

She added that within a week of the fire disaster, the municipality started with a reconstruction programme and that they would continue to follow it for the next 18 to 24 months. They had also established a number of mechanisms to ease the affected residential areas, she said.

Chetty said there were three areas to focus on post-fire. These were the need to deal with the mitigation issues, for example any particular threats such as the potential of landslides or any other fires. Reconstruction is the second area, and he said they were already built on a reconstruction path, and thirdly, Chetty said there was a need to build resilience to any possible fires and to be prepared to do so.

The statement released by the municipality further stated that, according to Chetty, the Western Cape Premier, Helen Zille’s office had set up the Garden Route Rebuild Initiative to support the rebuilding of the region and preliminary estimates to address the infrastructure of disaster damage, totalled R496.3 million for the entire region.

The breakdown of the cost estimates for Knysna alone were:

“Much of this funding must still be raised and applications are being made to various government departments for assistance,” explained Chetty.