The opposition has not pulled its punches over the lack of consequence for state officials involved in the massacre. 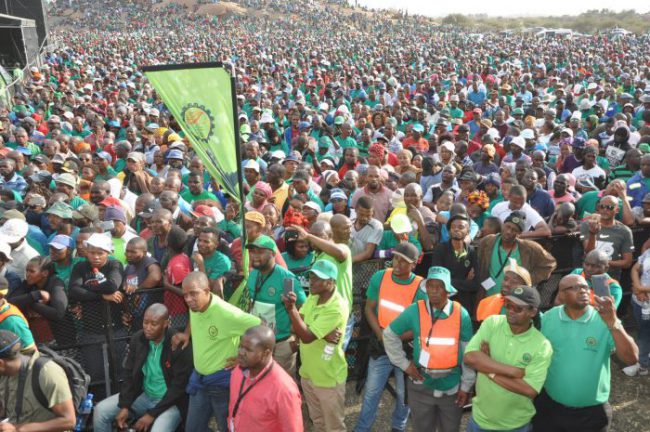 Hundreds of Amcu members attended the 5th anniversary of the Marikana massacre in Nkaneng, Marikana in the North West, 16 August 2017. Picture: ANA Reporter

Opposition parties should not use the Marikana massacre of August 16, 2012 for political point-scoring but rather look at lessons drawn from a tragedy that cost the lives of 34 striking miners during police dispersal operations five years ago, the ANC says.

He was speaking on the fifth anniversary of the incident, which shocked South Africans and the international community, making it to CNN’s list of top news stories of that year. At the time, television audiences watched in shock as police used live ammunition to disperse a group of striking miners.

Thirty-four people died on the day and all they had demanded was a R12 500 wage from their employer, Lonmin Platinum. Attending the commemoration in Marikana yesterday were Joseph Mathunjwa, president of the Association of Mineworkers and Construction Union, and opposition party leaders including the DA’s Mmusi Maimane, the Economic Freedom Fighters’ Julius Malema and the United Democratic Movement’s Bantu Holomisa.

All demanded that August 16 be made a public holiday, as with the March 21 commemoration of the Sharpeville massacre. Malema said “those in power wanted us to forget the brutality by police under the ANC government” but this day should belong to the working class in South Africa.

The EFF has said the massacre “must always remind us that this government always chooses the side of profit and white monopoly industries instead of black workers”.

The EFF vowed to ensure that the ANC was punished for presiding over this massacre: “We shall ensure it is removed from power and replaced with an economic emancipation government.”

Maimane called for the National Prosecuting Authority to prosecute those involved in the killings. The DA said that, five years later, not a single person was criminally prosecuted and no one took political responsibility.

Kodwa said such a tragedy should not have happened and that was why a commission of inquiry into the incident had been established.

It cleared some of those implicated and its recommendations were carried out.

Many attending the commemoration said they were still waiting for justice to be served on those who gave instructions to pull the trigger and those who eventually followed those orders.

Kodwa said the event changed the labour dispute landscape and the lesson to be learnt was that the gap between the “haves and have-nots” must be closed.

“We must create a framework so there is some engagement in the mining sector.”

Companies should improve conditions for miners, he added. – news@citizen.co.za

Death still stalks Marikana, as union recruiter gunned down in broad daylight
3 months ago
3 months ago

Malema to NPA: Prosecute Ramaphosa for Marikana Massacre, or we will
4 months ago
4 months ago

Death still stalks Marikana, as union recruiter gunned down in broad daylight
3 months ago
3 months ago

Malema to NPA: Prosecute Ramaphosa for Marikana Massacre, or we will
4 months ago
4 months ago