LISTEN: Manyi explains how Guptas loaned money to him to buy their businesses

The vendor finance deal has attracted both criticism and praise after Manyi disclosed it yesterday. 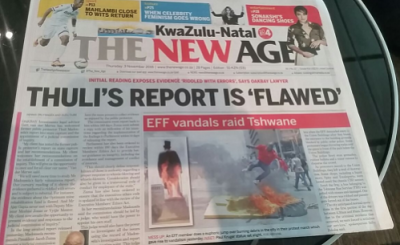 03 November 2016. The front page of the Gupta-owned The New Age newspaper blares the headline: Thuli's report is 'flawed' following the release of the State of Capture report.

Mzwanele Manyi bought two media entities from the Guptas in a multimillion-rand deal, but it wasn’t with his own money.

In a transaction branded vendor financing, Manyi has borrowed R450 million from the Guptas to buy The New Age newspaper and ANN7 news channel.

This transaction effectively means that Manyi is paying off a loan to the wealthy family, and once completed, he will be the owner of the businesses.

Speaking on Power FM, Manyi took offence to the radio presenter saying the Guptas gave him the money to buy their media companies.

“So effectively they are paying you to take over ANN7,” the presenter said.

“They are not paying but loaning me [the money]. There is a fundamental difference. I owe them money, I must still pay it back.

“This news agency has been very good in increasing diversity that has been lacking. There won’t be anyone that is barred from this media,” Manyi added.

Earlier, it was reported that the occupants of the premises where Manyi’s Lodidox company is situated in Soweto were unaware of the business dealings related to the company.

Manyi’s nephew, Lobby, said his uncle would visit the premises now and again.