The man allegedly kept saying 'I am going to do something today. I am tired of fixing things.' 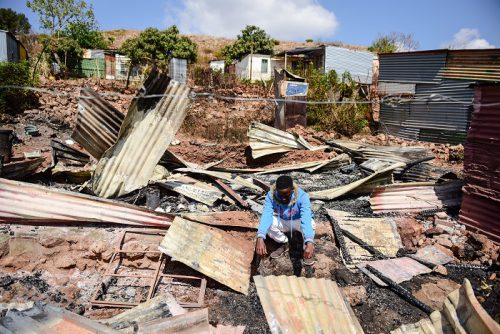 A man was said to have been acting strangely and saying “weird” things just before he allegedly doused his wife with petrol and set her and their home alight in Atteridgeville, Pretoria.

The woman, Lyzah Seroka, 38, was next door with her family and brother in Matlejoane informal settlement in Saulsville shortly before the incident in the early hours on Sunday morning.

Her husband, who apparently had a drinking problem, confessed to Seroka’s cousin that he was going to do “something”. The man had packed his bags on Saturday, threatening to leave his wife. The nine-months pregnant cousin, Susan Mahlare, told The Citizen she was in the shack when the man came home on Sunday night, reeking of petrol.

According to Seroka’s brother Karabo Seroka, who lives next door, his brother-in-law had earlier tried to attack a neighbour, while threatening to torch his shack. He said he managed to stop the attack when he found his brother-in-law assaulting the neighbour, but did not think he would burn down his own shack.

The man had allegedly doused the outside perimeter of the shack with engine oil, but it did not ignite. “He then went in, poured petrol in her bedroom and on Lyzah. He set her alight and the flames covered the whole house.

When I came in, after midnight on Sunday morning, I found my sister was burning and she had fallen on the burning couch. I saw my brother-in-law fleeing the scene.

“I managed to get her out of the flames but I burned my hands in the process. That is when we called paramedics,” he said.

Netcare 911 spokesperson Nick Dollman said the woman suffered severe burns and was in a critical condition when paramedics arrived on the scene.

Seroka succumbed to her wounds in the early hours of yesterday morning, after her parents travelled from Limpopo to see her at Kalafong Hospital. A case of murder is being investigated.

However, no arrests have been made, said police spokesperson Lieutenant Kay Makhubela.

“We are still searching for the suspect. Anyone with information must contact their nearest police station.” – rorisangk@citizen.co.za