The mayoral spokesperson dismissed the criticism, as the motion was never intended to be discussed in a closed session. 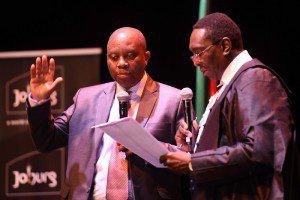 Mayor of Johannesburg Herman Mashaba is sworn in by Judge President Dunstan Mlambo during an event at the Joburg Theatre in Braamfontein, 26 August 2016. Picture: Neil McCartney

The acting director of communications in the office of executive mayor Herman Mashaba, Luyanda Mfeka, has pointed out council rules do not provide for any privilege to ordinary motions tabled for council.

Mfeka told The Citizen the only exception was where these motions were to be raised in a closed session of council and were thus privileged.

“This does not apply in the present circumstances,” Mfeka argued.

“The motion filed by the ANC directly affects residents and the mandate they gave following the last local government elections. That mandate squarely rejected ANC governance in the City. Where the ANC attempts to challenge or undermine that mandate, the residents of Johannesburg have every right to be informed,” he elaborated.

He said, therefore, this baseless allegation was a smokescreen aimed at assuming control that would allow the looting to continue once again because change threatened the very survival of the ANC.

The office of the mayor conceded, however, that the ANC had every right to raise a motion such as this and that Mashaba welcomed the opportunity to dispel the ANC’s baseless claims in council.