AfriForum says today’s urgent application was the first step in their bid to get Mugabe’s diplomatic immunity set aside. 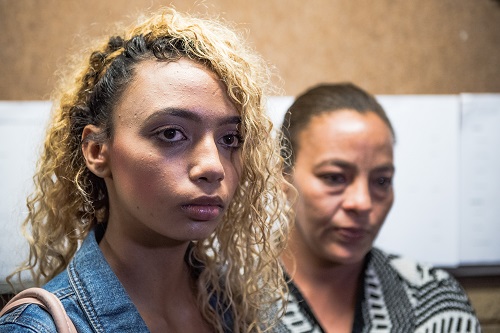 Gabriella Engels and her mother Debbie are seen at the North Gauteng High Court where they arrived with Afriforum members to dispute diplomatic immunity granted to Grace Mugabe after allegedly assaulting Gabriella with an extension cord in a Sandton Hotel, 19 September 2017, Pretoria. Picture: Jacques Nelles

Engels, assisted by AfriForum, will today ask the High Court in Pretoria for an order allowing them to institute proceedings against the first lady to have diplomatic immunity granted to her by the South African government on August 19 this year set aside.

They will also seek an order to have court papers served on Mugabe at the presidential offices in Zimbabwe.

Afriforum’s Kallie Kriel said today’s urgent application was the first step in their bid to get Mugabe’s diplomatic immunity set aside with the aim of eventually seeing her stand trial on charges of assault with the intent to do grievous bodily harm to proceed with civil action for damages against her.

Engels, who attended the hearing with her mother, Debbie, did not want to comment, but her mother said Mugabe’s purported claims that Engels had attacked her was “absolute nonsense” and a transparent attempt to get away with her criminal behaviour.

Engels laid an assault charge against Mugabe after she was allegedly attacked with an extension cord after Mugabe found her with the first lady’s two sons in a Sandton hotel room.

Engels’ mother told reporters her daughter’s life had been turned upside down by the incident and she just wanted to see that justice was done and that Mugabe was held accountable for the attack on her daughter.

Mugabe was allowed to leave South Africa after International Relations Minister Maine Nkoana-Mashabane gave her the green light to leave, but AfriForum maintained she was here on private and not government business when the incident took place and should never been granted diplomatic immunity.

The Zimbabwean embassy has given notice that it will seek to oppose both applications.