Having found nobody behaved in a dignified manner on the day, the judge said the scuffle could have been resolved with a beer and a handshake. 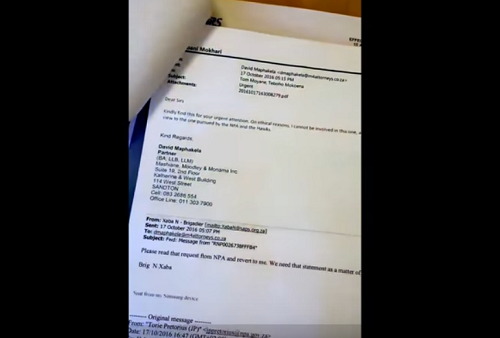 SARS Hostage Drama: Vlok Symington held against his will.

Sars legal expert Vlok Symington’s bid to interdict South African Revenue Services (Sars) from taking disciplinary action him on grounds that he is a whistleblower was dismissed by Pretoria High Court judge Hans-Joachim Fabricius this morning.

Symington has asked the court for an urgent application to halt the disciplinary process against him, as he believes his refusal to change details of a document that NPA boss Shaun Abrahams, used as the basis for abandoning a case against former finance minister Pravin Gordhan, was in terms of the Protected Disclosure Act.

BREAKING: Judge dismisses #VlokSymington bid to interdict SARS from taking disciplinary action against him on grounds he is whistleblower pic.twitter.com/pxpkhgzjSy

In their argument, Symington’s counsel sought to convince the court their client was caught up in political battles whose envisaged conclusion was the firing of Gordhan.

He also claimed he was kidnapped by Sars commissioner Tom Moyane as an act of intimidation.

Fabricius rejected Symington’s version of events, saying that was a scuffle that could have been easily resolved with a handshake and a beer.

Fabricius ruled that Symington failed to make a case for an interim interdict, and dismissed the application with costs.