#CosatuStrike: Let them get off their high horses, Sdumo Dlamini tells ANC

If the ANC is the government of the people, it has to listen, says Cosatu's president. 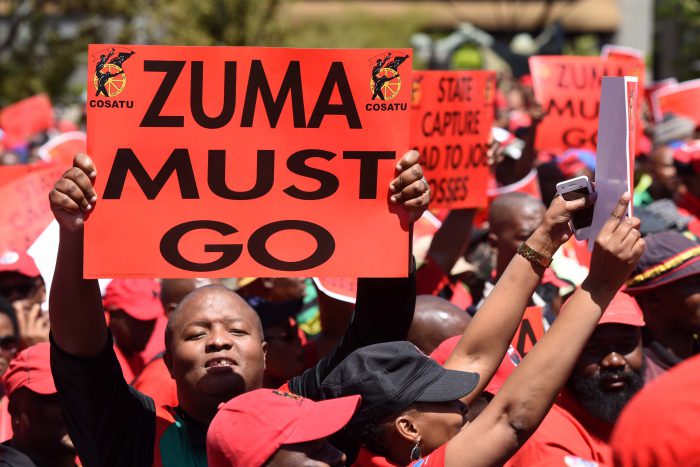 A march by COSATU in Johannesburg, 27 September 2017. They marched in Johannesburg as part of their national strike and handed over memorandums to the City of Joburg, FNB, the Gauteng Premier and the Chamber of Mines. Picture Neil McCartney

As the national strike against state capture and corruption organised by the ANC’s alliance partners got under way on Wednesday morning, president of the Congress of South African Trade Unions (Cosatu) Sdumo Dlamini delivered a warning to the governing party to listen to citizens’ concerns around these issues.

Speaking to reporters in Durban, where he led thousands of workers and members of the SA Communist Party in protest, Dlamini said the march was not an exercise in futility, and if the ANC is the government of the people, it had to listen.

“Let them get off their high horses, and say how they are going to respond to these issues because what I see now is a groundswell wave of anger that is emerging in society. The ruling party has got to respond to that quite positively,” he said.

The labour federation’s leader said apart from state capture and corruption, Wednesday’s nationwide shutdown was about addressing the exploitation of workers through labour brokers, the scrapping of Gauteng’s e-toll scheme and job losses, among other concerns.

“We are assessing a very positive response by our members to honour this day, its Cosatu day today. We have our friends and associates who have joined us here, it’s a successful day, and we hope by the end of the day, we would have made the statement that cooperate capture, state capture has got to be dealt with in this country,” said Dlamini.

“It [state capture] has got to be controlled; it has got to be defeated. Corruption has got to be nabbed from where it comes from and those who are guilty of that, they must be taken to book,” he added.

Dlamini said marches ultimately resulted in action being taken and workers should not be discouraged by naysayers.

“We should not say we will stop struggling purely because those who are in power are that moment are not listening. We will one day get those who will listen,” he said.