The mayor has issued a statement full of praise for Vuyani Singozo, but two legal firms had earlier been of a different view. 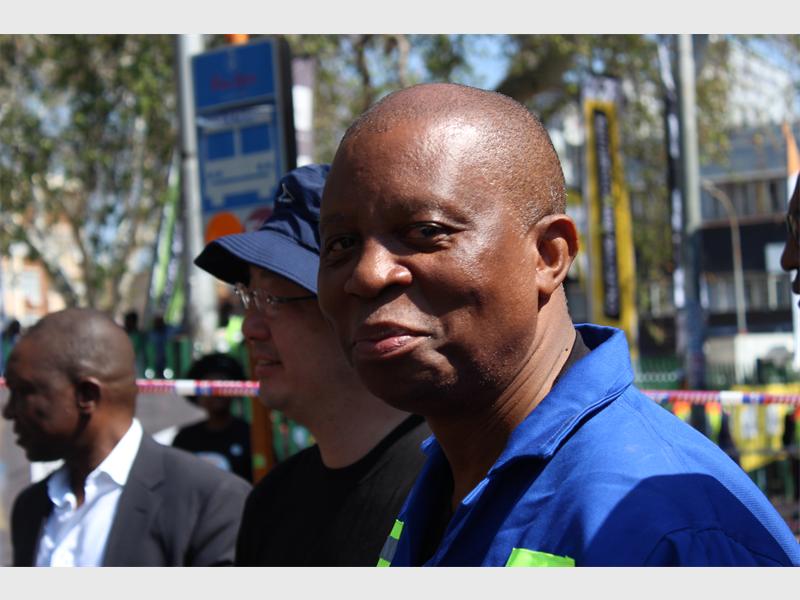 Vuyani Singozo resumed his duties yesterday with three months’ salary and annual increases calculated from the time of his termination in 2014.

Mashaba, however, vehemently denied there was anything untoward about the reappointment of Singozo and wrote that he was “pleased to announce … the reinstatement of Mr Vuyani Singozo after being unfairly dismissed by the previous administration”.

Mashaba claimed that Singozo “was victimised by the previous administration for leading workers in the City to raise awareness about corruption and abuse” and that his “reinstatement came as a result of independent arbitration, which led to an agreement between the parties”.

In so doing, Mashaba’s office also failed to provide responses to specific questions The Citizen had sent about Singozo on Friday.

Several sources The Citizen has spoken to allege that the only reason Singozo has been re-employed is to enable him to hold a leadership position in a Samwu faction that supports the mayor. Samwu insiders told The Citizen in order for Singozo to deal with Mashaba’s office as a union representative, the rules dictate that he be a city employee.

Not only had the proposed reappointment earlier been ruled out by two legal opinions from two separate legal firms, City Power acting MD Tiaan Ehlers had informed Nico de Jager, the MMC responsible for the municipal power entity, that the reappointment would lead to reputation risks for the City and reignite tensions between two warring SA Municipal Workers’ Union (Samwu) factions in the city.

Mashaba’s apology to Singozo, as well as his claims that the man had “fought for his rights, despite being humiliated and intimidated” appear to go against the views of the two legal firms and the city official.

In November 2016, Patrick Deale of Deale Attorneys was briefed by the City to look into allegations from the Samwu 2 faction that the MMC during ANC’s tenure, Matshidiso Mfikoe, and now axed City Power boss Sicelo Xulu had victimised him for leading several strikes.

Deale wrote in his report on 12 November 2016: “I accordingly recommend that the employer should defend the employee’s referral for unfair dismissal when it is scheduled for hearing at the CCMA.”

On 7 March 2017, CS Beckenstrater of Moodie and Robertson (a firm of attorneys, notaries and conveyancers) forwarded his “Review and Assessment of Dismissal of Vuyani Singozo by City Power” to the executive mayor. Beckenstrater outlined in his report that Samwu had requested the review and they were the union’s preferred service provider to conduct the assessment.

The report stated in it’s recommendations that “consequently, we cannot recommend that Singozo’s dismissal be set aside”.

The conclusion argued, “on the face of the documentation arising out of the Disciplinary Hearing and appeal, it cannot be said that Singozo’s dismissal was procedurally or substantively unfair”.

What Mashaba’s office also omitted to say in its statement was that there were allegations that Singozo had been accused of siding with a faction of Samwu that had been declared “illegitimate” by the court.

In a written judgment handed down on 14 December 2016, the Labour Court found in favour of what it called the ‘Molalenyane faction’, against the ‘Tshililo faction’. At the heart of this case was who could be considered the legitimately elected officials and office bearers of Samwu in Johannesburg. The ‘Tshililo faction’ filed an application to appeal the case.

Delivering his judgment in the Labour Court on 8 March, Acting Judge S Snyman dismissed the applicants’ leave to appeal. Singozo was the seventh applicant.

After acting as City Power’s GM of internal audit for close to three years, he applied with seven other candidates when the position was advertised. He lost to an external candidate and, on 1 September 2014 referred an unfair labour practice dispute to the CCMA. One of the documents he used was titled “Motivation for Appointment – GM: Internal Audit (RAC Group)” with extracts of in-committee meeting minutes relating to the recruitment process.

The commissioner ruled the documents inadmissible and City Power consequently conducted an “investigation into the Alleged Irregularities Pertaining to the Confidential Information used for Personal Interests”. The report recommended that Singozo be charged with “abuse of position in that he [Singozo] used confidential information obtained during the course of his duties as manager internal audit for his personal benefit at the CCMA”.

When contacted on Friday, Mashaba’s acting director of mayoral communications Luyanda Mfeka protested that a Monday night deadline was unfair. On Tuesday he reiterated that the City would only be able to respond to the allegations by close of business on Wednesday and emphasised that this was the only comment he was prepared to give.

However, this morning a media statement was issued to various media houses, though The Citizen was excluded.