Mayor Herman Mashaba has threatened to lay a complaint at the SA Human Rights Commission (SAHRC) against the labour federation. 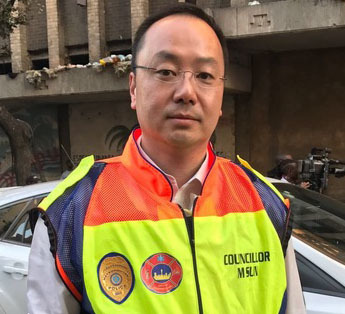 The Congress of South African Trade Unions (Cosatu) has “unreservedly” apologised to the City of Johannesburg’s Michael Sun, the member of the mayoral committee (MMC) for public safety, over allegations of racism levelled against one of its officials.

During last Wednesday’s march against state capture and corruption organised by Cosatu and the SA Communist Party (SACP) in Johannesburg, Sun received Cosatu’s memorandum of demands on Mayor Herman Mashaba’s behalf‚ as he needed to be present in a council meeting.

In a statement on Monday, Mashaba said upon the MMC’s arrival at the march, one of the Cosatu leaders present apparently announced that the mayor had sent a “fong kong” to receive the memorandum.

“He proceeded to state that at least he [Sun] knew ‘karate’ and later referred to him as ‘Mr Lee from Fong Kong’,” Mashaba said.

He condemned the comments directed at Sun, and apologised to the Chinese community on Cosatu’s behalf after the labour federation failed to apologise to Sun and retract the remarks.

Mashaba threatened to lay a complaint at the Human Rights Commission (HRC) against Cosatu. He also said he would take legal advice on possible legal action, as the MMC was subjected to the comments in his official capacity.

Cosatu said it had noted the allegations of racism, and wanted to apologise to Sun for “any hurt and embarrassment caused by the statements” from the unidentified official.

“Cosatu will never condone any form of racism or racial discrimination,” the union federation said in a statement on Tuesday.

“We have concluded that the statements made against Michael Sun were intolerant, patronising and hurtful and could be easily interpreted as bigoted. That is not what our organisation stands for.”

Mashaba to lay complaint with SAHRC against ‘racist’ Cosatu

ActionSA answers five questions about what makes them ActionSA
57 mins ago
57 mins ago
PREMIUM!

ActionSA answers five questions about what makes them ActionSA
57 mins ago
57 mins ago
PREMIUM!