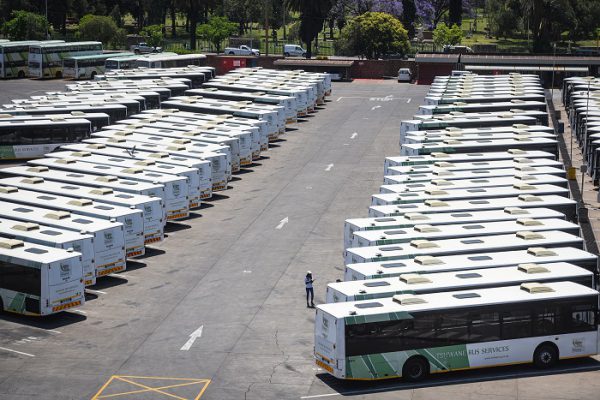 Tshwane bus drivers sat under shaded patios while scores of empty buses were parked neatly at the C de Wet depot yesterday after angry workers downed tools, barricading drivers and buses from exiting in the morning.

The workshop personnel, including artisans, senior operators and general workers, blocked the gate with two trucks yesterday morning. Only three of 105 buses were able to exit the depot.

This left bus commuters in Centurion, Olievenhoutbosch, Danville, Pretoria East and Lotus Gardens “severely” affected by the strike. South African Municipal Workers’ Union (Samwu) regional secretary Mpho Ntladinyana said the workers had downed tools as they have not been paid for overtime since February.

He said this also included several bus drivers that were affiliated to the union.

“They are crying about overtime. They are owed their money for overtime since February. They also don’t have a cellphone allowance anymore, which was cancelled eight months ago. That means whenever there is an emergency, they have to use their own airtime,” Ntladinyana said.

He said the union would meet with the city’s management today to discuss “unilateral restructuring” of shifts at the depot.

“These are not issues someone can turn off. If they [the city] pay their [workers] money, there won’t be any issues. But if they don’t, it will be a problem. It means they will continue the strike.”

City of Tshwane spokesperson Selby Bokaba said management was surprised by the sudden strike action, as the workers did not make them aware of their intentions.

According to Bokaba, workers were also disgruntled by “apparent” outsourcing of work to external companies.

He said the behaviour of the strikers was condemned, as they did not follow proper channels. “They should have utilised other avenues available to them to express their grievances. The city apologises to commuters,” he said.