Mayor Herman Mashaba says he hopes that when residents see their neighbours cleaning the streets, it will motivate them to do the same. A Re Sebetseng, Johannesburg’s monthly voluntary clean-up campaign, is gaining momentum. The campaign encourages city residents to take care of the environment and promote a culture of reducing, reusing, and recycling waste to ensure that Johannesburg becomes one of the cleanest cities in Africa.

At the second monthly campaign, on Saturday, mayor Herman Mashaba said he hoped that when residents saw their neighbours cleaning the streets, it may motivate them to do the same.

Areas that are full of waste will be prioritised as places that need to be cleaned. The mayor emphasised that the community played a huge role in ensuring that the areas they live in remain clean. The mayor said the biggest challenges faced in this initiative was not cleaning up the city, but maintaining a clean city.

“We need to be realistic here; places will only be clean if the community plays their own part. “We can do all we can to keep the areas clean but they won’t remain clean unless the people who live there keep it clean,” continued Mashaba. 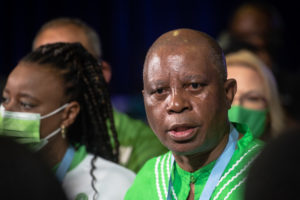