The EFF leader says Black Monday protesters were 'illegally' blocking roads, but police were not shooting rubber bullets at them. 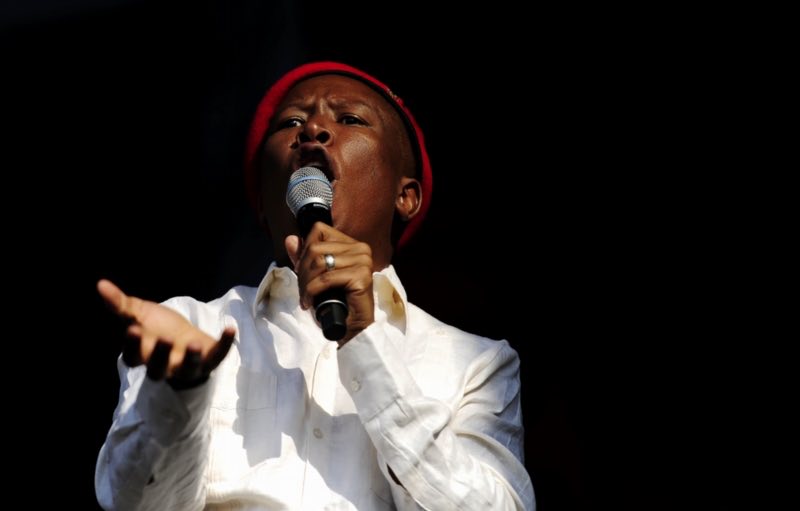 Economic Freedom Fighters (EFF) leader Julius Malema addresses the crowd during his party’s Youth Day commemorations at the Boipatong Stadium on June 16, 2017 in Johannesburg, South Africa. Malema his party will continue to vote with the DA and other parties except the ANC, ‘as the governing party has protected white privilege.’ Picture: Gallo Images

Economic Freedom Fighters (EFF) leader Julius Malema has taken to social media to complain about the difference in treatment by police in the farm murder protests, compared with protests by black African youth.

In a tweet that has received many comments, Malema said protesters were “illegally” blocking roads, but police were not shooting rubber bullets at them. However, if it were African youth blocking the roads, the treatment by police would have been different.

“White farmers are blocking the roads illegal and police are not shooting rubber Bullets but if it was African youth, yho!!! @MbalulaFikile,” read his tweet.

White farmers are blocking the roads illegal and police are not shooting rubber Bullets but if it was african youth, yho!!! @MbalulaFikile

Among those who commented was Police Minister Fikile Mbalula, who replied: “Lawlessness from any quarter is unacceptable and should be condemned. In this instance you might be right, Police lowered the guard.”

The EFF leader went on to ask about the whereabouts of the Umkhonto we Sizwe Military Veterans Associations (MKMVA) soldiers, saying he needed them. He, however, called them drunkards.

Where are those MKMVA drunkards when you need them on a #Blackmonday, yeses.

His comments divided social media, with some saying police had to treat all protesters the same way, while others said his observation was wrong, pointing out the protesters did not loot or burn any buildings.

“Oh, and they are not burning stuff … that surely helps … great tip for future mass action,” said one who was in support of the protests, while another wrote: “When taxi and truck drivers were arrested last week for blocking the highway did you see anything burnt?”

Many complained the road blockages prevented them from reaching their destinations.