Lobby group says the police minister was contributing to the problem as he has not released specific figures on farm attacks and murders. 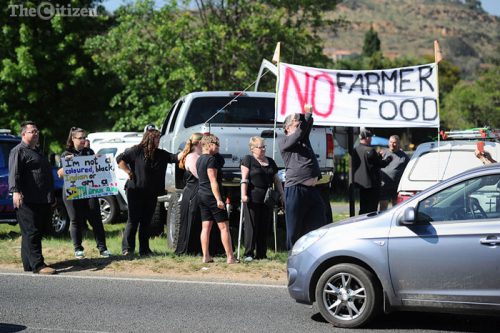 Supporters of the #BlackMonday picket along Hendrik Potgieter Road on 30 October 2017, as they protest against farm murders. Picture: Michel Bega

Minister of Police Fikile Mbalula was “part of the problem” regarding attacks and murders on farms, as he has made it “quite clear” he is not going to do anything about it, civil rights group AfriForum said yesterday.

Thousands of people took to the streets of Pretoria and other parts of the country yesterday in a protest dubbed #BlackMonday to picket against attacks and killings on farms in South Africa.

Dressed in black, they joined AfriForum and Solidarity union at the Voortrekker Monument to raise awareness on the scourge.

The police minister was contributing to the problem as he had failed to give feedback on the matter, AfriForum deputy CEO Ernst Roets said. He was referring to the fact that Mbalula did not release specific figures on farm attacks and murders when he tabled the 2016/17 crime statistics in parliament last week.

“We are going to continue to put pressure on government … and [continue with] protests. “But we are not going to wait for the minister, because Mbalula has made it clear he is not going to do anything about this,” he said.

“Malema makes generalisations that call for communities to feel a sense of polarisation and division. Mbalula made this a laughing matter in parliament.

“We can’t allow anyone in this country to become just a statistic. To government at this moment, farmers are just numbers.”

He said the department would let those who arrived late write the exams.

“Administrative prescripts will be invoked for all those who might have missed [yesterday’s] paper. “We expect minimal, exceptional cases,” he added.

“They were released with a R1 000 fine each and warned to appear in court on November 24 if they want to challenge the fine.”