The president told MPs there were many books written about him and that his job was not to respond to allegations contained in them. 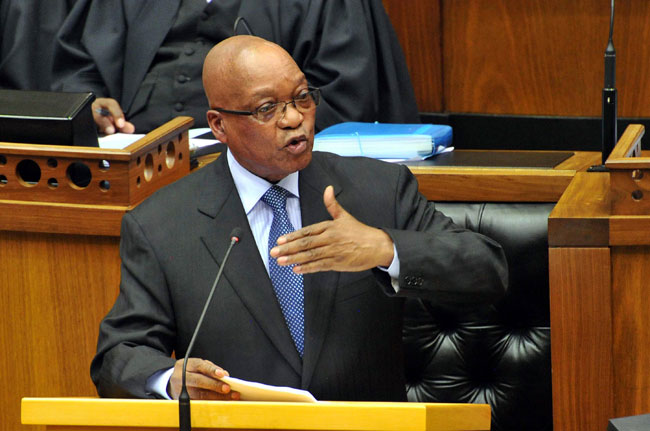 ‘There are many books that have talked about Jacob Zuma in this country saying speculations and rumours.’

The book details how Moodley, who has previously pocketed government tenders, had paid Zuma a monthly salary of R1 million from 2009 to 2010. The payments were made by his company, Royal Security.

Sars picked up on the irregular payments, as it had not been declared under Pay As You Earn (PAYE), with Zuma also not declaring the payments to Sars.

Zuma denied any knowledge of information exposed in the book to the effect that he received a R1-million monthly retainer from Roy Moodley, his friend and a KwaZulu-Natal businessman. He said he had never received any payments from anybody, including individuals mentioned in the book.

“Thank you, Madam Speaker. I have given a very categorical answer to the question, and secondly, there are many books that have talked about Jacob Zuma in this country saying speculations and rumours. I don’t think [is] my job is to answer books. I have tabled my answer here.”

Responding to questions posed by Mmusi Maimane, the leader of the opposition, DA, Zuma refused to address the issue on whether he was willing to table 2009 tax declarations to the House.

Speaker Baleka Mbete at first would not allow Maimane to challenge the president on his assertion that he had answered the questions put before him.

Cope MP Deidre Carter followed the president’s answer with what was ruled a supplementary question.

Carter took on Mbete and her questions were not new, but were merely a follow-up to the answer Zuma had given.

Carter quoted the Prevention and Combating of Corruption Act, which requires Zuma to explain to South Africans what he will do about the allegations, which include allegations of corruption implicating his son, Duduzane.

Mbete agreed to hand the matter over to the procedural table officials to give guidance on how Zuma would answer the question.