Dad, 67, was sentenced this week. At the time of crimes in ’80s, he was a devout church worker. 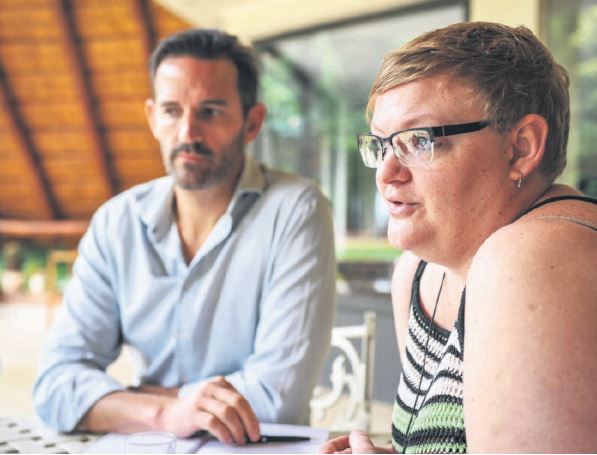 JUSTICE AT LAST. Marijke Mwathi and her brother, Jason Donald, speak to the media in Pretoria. Picture: Jacques Nelles

She calls him George – the man who started raping her when she was just two years old. The churchman she fought three governments for nine years to bring to book for turning her childhood and those of many other girls into a nightmare. Her father.

Last week, 40-year-old Marijke Mwathi finally saw her father, George Bennet Donald, 67, sentenced in the Pretoria Magistrate’s Court to an effective seven years imprisonment for the rapes of her and her foster sister.

After years of denial and fighting his extradition to South Africa tooth and nail, George pleaded guilty to the charges and tearfully told his daughter he was sorry.

“I told him I accepted his apology, but I needed to do this. I’ve worked through this. I feel nothing for him. He is as much a stranger now as he was the monster in the cupboard when I was a child. I know he needs to face the consequences. I know there were others. I hope somebody reading about it might find peace or come forward if they know he’s going to prison,” she said.

Marijke, who travelled from Scotland to attend the trial, was with her brother Jason, now an author living in Switzerland, her former foster sister, and *Elizabeth, who was as a child also molested by George when he was a volunteer youth worker at the Hatfield Christian church.

Marijke said George raped her between the ages of two and 11 while maintaining the image of a devout Christian who was fun, trustworthy and “good with children”.

Not knowing how to cope with the abuse, she pulled out her hair and bit her nails until they bled, but kept quiet for fear he would carry out his threat to harm her mother and brothers, who knew nothing of their “secret”.

The abuse only came to light when her foster sister, who was also raped, told her mother. Her mother went to the church for support and it offered counselling and cut back on George’s youth work, but did not go to the police despite complaints that other girls were also being molested.

Marijke and Jason said their mother’s diaries showed senior pastors knew about the abuse, but ignored it. When her brother approached the church in 1990, a senior pastor who had counselled her and her parents denied any knowledge of it and when Marijke contacted the church as an adult, they said they would pray for her.

The Hatfield Christian Church has apologised to the daughter of a former volunteer at the children’s church and other women who were molested and raped by him in the ’80s and expressed its commitment to address their concerns and wellbeing.

Marijke Mwathi, her brother, Jason Donald, and a woman who, as a child, was molested on church property for years, are pointing at the church for contributing to their ordeal at the hands of George Donald by not going to the police and keeping quiet about the abuse.

The church said it had learnt of the immense pain caused to the families and victims with deep sadness and regret and acknowledged the severe damage and hurt caused by such violations, which the church did not condone.

“Owing to the time that has lapsed and the fact that those directly involved in the matter are either retired or deceased, we are not in a position… to speak with any certainty (about) how the situation was managed.

“We recognise that 30 years ago, matters such as these may have been handled differently by (the church) and by society as a whole. With the insights gained and despite not having records to show precisely how the matter was handled… we would certainly not treat such a tragedy… in the manner it is said to have been handled.

“Hatfield Christian Church offers a sincere apology for any further hurt or damage that may have been caused by our handling of the situation. Our primary value in these types of situation is always to protect the child first… We currently have clear procedures in place that would include involving social welfare and we would take further actions based on their recommendations.

“We would also immediately withdraw a suspected perpetrator from contact with children, while offering appropriate and permissible support.

“Currently, all those involved in working in our children’s church are required to obtain police clearance on an annual basis. Our children’s church volunteers also go through a supervised probationary period before they are released to work with children,” the church said.