Cyril Ramaphosa: the ‘charismatic and capable’ man behind the politics

It has been said that he is more charismatic and capable than any other party contender, but who exactly is Cyril Ramaphosa? We take a look at who Cyril Ramaphosa is behind the deputy president persona.

Not much is actually known about Ramaphosa’s private life, as he keeps it out of the spotlight. Cyril Ramaphosa was born in Soweto on 17 November 1952. He is the second child of his mother, Erdmuth, and retired policeman father Samuel Ramaphosa.

Ramaphosa matriculated from Mphaphuli High School, and went on to study law at the University of Limpopo.

Ramaphosa was married to businesswoman Nomazizi Mtshotshisa, but the couple divorced. He later married Hope Ramaphosa, and the couple had a son together, Andile.

EFF leader Julius Malema claimed there were rumours in the ANC that Ramaphosa beat his former wife. However, Hope denied the rumours and said Cyril did not have it in his character to be violent towards a woman. She added Cyril was someone who did things “amicably” and would “rather negotiate than beat [people] up”.

She said they had been together for a long time, and described the politician as “gentle, kind, soft-hearted and very sensitive to women’s issues”.

Hope also expressed her firm support for Cyril’s bid to become president, which speaks volumes to his character. 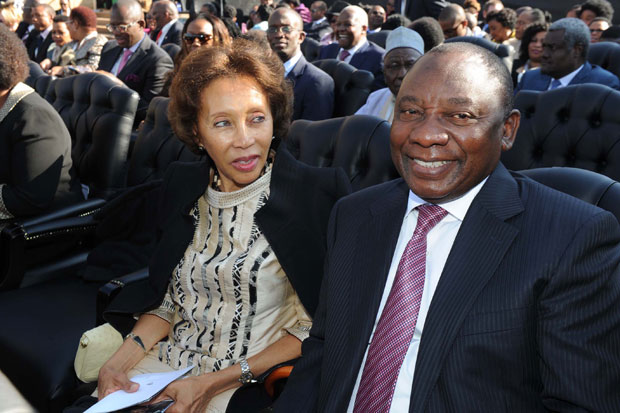 Ramaphosa is currently married to medical doctor Tshepo Motsepe, with whom he has four children. Earlier this year, a cheating scandal dealt a blow to the deputy president.

He admitted to having an affair with a medical practitioner eight years ago, and he confessed it to Tshepo, reported Sunday Times.

Tshepo, who is the sister of billionare Patrice Motsepe, expressed unequivocal support for her husband, saying she still loved and respected Ramaphosa.

“It is very sad what is happening. It’s disappointing that people have to go to such lengths to discredit a person. I am very, very upset about it. We have been together for a very long time, and are happily married. I support and respect him, and I love him.”

Ramaphosa was accused of being a blesser after his affair scandal came to light. In a statement, the ANC presidential candidate said he had supported 54 students, some of them male, and his wife was aware of the financial assistance he gave them on a monthly basis.

“There are 54 young students – both men and women – that my wife and I provide financial assistance to on a monthly basis and have done so for several years. It is unfortunate that evidence of these bank transfers have been used to make scandalous allegations against me and, worse, to make public the names of some of the people assisted.”

Ramaphosa also founded the The Cyril Ramaphosa Foundation, an independent nonprofit organisation that is aimed at improving lives and creating opportunities through programmes in education, enterprise development, social cohesion and nation-building.

The billionaire politician appears to be very much a family man, as he rejected the state house when he was appointed deputy president. Instead of moving into a Victorian-style mansion in Pretoria as his official residence, Ramaphosa preferred to live in his own house in Hyde Park because his family, including his wife Tshepo and some of their four children, still lived there.