By December 5, the party’s branches had largely spoken, and its provincial structures had consolidated the branch delegates’ voting preferences. 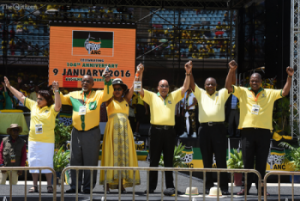 By December 5, the party’s branches had largely spoken, and its provincial structures had consolidated the branch delegates’ voting preferences. The lay of the land seemed clear. Yet, on close dissection it’s evident that developments could still subvert what appeared to be definitive trends in branch nominations.

Less than two weeks prior to ballots being cast at the Nasrec Expo Centre in Johannesburg, the contest is closer than both the Polokwane race of 2007, (when Jacob Zuma beat Thabo Mbeki) and 2012 in Mangaung (when Zuma beat then deputy Kgalema Motlanthe).

The number of branches endorsing Ramaphosa by the evening of December 4 were 1,860 and Dlamini-Zuma 1,333. A total of 3,193 for both candidates, or around 2,000 fewer than the total number of conference voters

The branch nominations have confirmed that the two leading 2017 candidates for the ANC presidency are Cyril Ramaphosa and Nkosazana Dlamini-Zuma. While Ramaphosa has a lead, the intricacies of the election process caution against early celebrations: there are black holes that could still devour the advantages he appears to have.

The voters at the ANC conferences comprise roughly of 90% delegates from ANC branches across the nine provinces. Provinces had been allocated a total of 4,731 delegates (proportionately in terms of membership figures). The rest of the about 5,240 voting delegates come from the ANC’s national executive committee and top six officials (roughly 90 in total). The nine provincial executive committees (27 each, thus 243), the women’s, youth and veterans’ leagues (60 each, thus 180).

The number of branches endorsing Ramaphosa by the evening of December 4 were 1,860 and Dlamini-Zuma 1,333. A total of 3,193 for both candidates, or around 2,000 fewer than the total number of conference voters.

Given that the race will go down to the wire, and that a few hundred ballots in either direction could make a world of difference to the ANC and South Africa, this analysis dissects eight black holes that account for the approximately 2,000 “discrepancy”.

At the core, the uncertainties that make up the eight black holes are:

The battle lines are drawn and the result is close. Exact calculations will remain impossible; the result is likely to be known by 17 or 18 December. In the interim, all South Africans can do is rely on circumstantial evidence, including signs of confidence or panic in the ranks of the candidates. They can also try and plug the black holes.

Susan Booysen, Professor in the Wits School of Governance, University of the Witwatersrand