The workers demanded the municipality to be alleviated to a metro status, to work overtime and refuse to use rented vehicles. 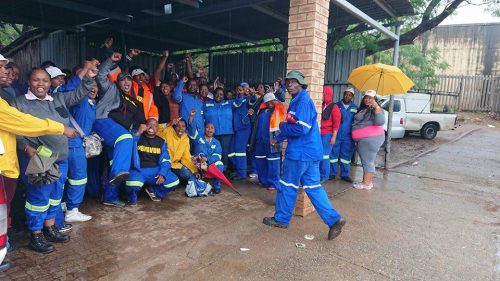 The two allegedly refused to accept their suspension letters and also refused to vacate the municipal premises, they further allegedly incited other workers at the water and sanitation unit to go on an unprotected strike.

“Public safety has intervened in the matter to ensure stability whilst management embarks on a legal process ensuring procedures are followed  to discipline just over 67 employees for intimidation, gross insubordination, being in contempt of court and engaging in an illegal strike,” said municipal manager Nqobile Sithole.

She said the workers demanded the municipality to be alleviated to a metro status, demand to work overtime and refuse to use rented vehicles.

“The municipality and residents cannot continue to be held at ransom by employees who are not committed to delivering the service which the ratepayers are paying for. We cannot allow a situation where municipal employees refused to be managed and are law unto themselves,” she said.

“We are committed to work with those who understand that we are a public institution and our priority should be serving the community in line with the Batho Pele principle.”

She said the municipality would ensure that service were not interrupted during the illegal strike.

The SA Municipal Workers Union (Samwu) in Rustenburg on November 24, wrote to the municipal manager demanding to use municipal vehicles and not rented fleet.

The municipality was given three days to bring the municipal vehicles to the water and sanitation unit.

The union further informed the municipality that they would not used the rented fleet as from November 28,  that they were committed to render service using municipal vehicles or walk on foot to render such service collected by affected clients.

They said the action was not an intention to provoke or embark on an unprotected strike. They said municipality would save money to maintain its fleet if it stops using the rented fleet.

The workers had previously complaint that the municipality rented trucks instead of servicing its on fleet and their condition of employment was changed because municipal drivers were turned into guides, who direct rented trucks drivers around Rustenburg.