Chief Khoisan SA said they will not eat until Zuma or Deputy President Cyril Ramaphosa come forward, adding that they are only drinking water. 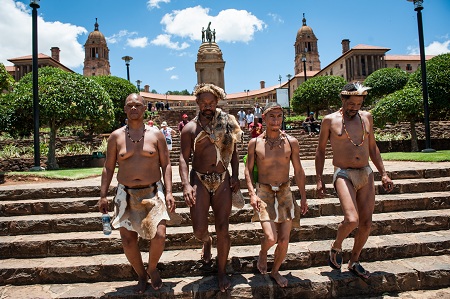 The Khoisan group who have been camping out on the lawns of the Union Buildings, 13 December 2017, Pretoria. Picture: Jacques Nelles

The Khoisan men camping on the lawns of the Union Buildings yesterday warned President Jacob Zuma that if he takes too long to meet with them to accept their memorandum, he’ll arrive to find their dead bodies.

Chief Khoisan SA said they will not eat until Zuma or Deputy President Cyril Ramaphosa come forward, adding that they are only drinking water.

During a brief by Minister in the Presidency Jeff Radebe, the group thanked him for his presence and politely declined his offer to help them get back to the Eastern Cape, saying they would rather wait a little longer for Zuma or Ramaphosa.

Radebe said he would personally give the memorandum to the president in order for him to address their issues.

“Before I came here I called him and told him I will receive the memorandum from Chief Khoisan SA and he said he would be available to meet with you in the first two weeks of January,” Radebe told the men.

“With all due respect, minister, the people in Eastern Cape are laughing at us, saying the president will never come, but only send a junior official,” Khoisan activist Christian Martin said. Radebe immediately responded by saying: “I am not a junior official.”

Martin then told Radebe that they will see him on Saturday at the ANC conference in the Johannesburg Expo Centre.

“Seeing that it’s Reconciliation Day, we thought it good to come and spend it with the ANC.” Chief Khoisan SA said they are in no hurry, and that the president can take his time because they are not going anywhere. Radebe only received a memorandum from Chief Joseph Marble, president of the Khoisan Mass Movement in South Africa, who came from Johannesburg and walked from the Pretoria station to the Union Buildings yesterday. Marble said they had been trying since October to get permission to walk across the country to raise funds to build houses for the “poor of the poorest”.

He said at least 500 000 Khoisan people are currently without homes. He demanded that all electricity and water arrears be scrapped, saying if the government could scrap Zimbabwe’s loans, they can surely do it for their own people.

The movement’s Ursula Phillips said it’s time the real story about the Khoisan is told, the story of the “genocide – of how our people were killed by colonials and how they took our land”.

Khoi-San say SA is theirs. All of it