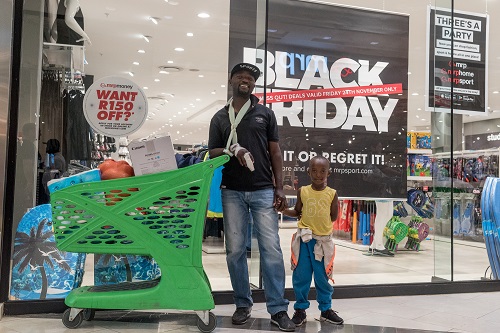 Alter Bhebhe and his son Mangaliso stand with a shopping trolley loaded with goods on Black Friday in the Mall of Africa in Midrand on 24 November 2017. The annual shopping event saw the malls thronged with shoppers looking for goods during the sale. Picture: Yeshiel Panchia

An improvement in South Africa’s consumer spending for November has been attributed to the Black Friday and Cyber Monday sales – but financially this is not much to be optimistic about.

According to the BankservAfrica Economic Transaction Index (BETI), its reading for November was 127.8, which was a 0.3% change from October.

However, many consumers are still treading with caution as uncertainties in the economy persist, according to Mike Schüssler, chief economist at Economists dotcoza.

“Sales during Black Friday and Cyber Monday enticed consumers to spend more, leading to a BETI increase, which is also seeing November becoming a stronger month, spurring the shopping season to arrive earlier in the last two years,” explained Schüssler.

Black Friday and Cyber Monday led to the annual BETI growth of 1.6%.

“There are, however, still indications of weakness in the economy that suggest the weekend of sales distorted the full month of November’s economic transaction figures,” said Schüssler. “Transaction sizes have declined in nominal terms and reflect an economy where confidence is lacking. On a quarterly basis, the BETI declined by -1.3%, indicating consumers and businesses are still undertaking a cautious approach to their spending.”

Schüssler said December as a major shopping month is gradually changing with many South Africans’ shopping habits mirroring Americans when it comes to Black Friday.

“As such, we should treat the November economic transaction increases with caution until the seasonal trend catches up with this change in habits.”

Statistics South Africa, in releasing retail trade sales for October, also showed a 3.2% increase. This is measured in real terms with constant 2015 prices.