The party says its 'Sizofundangenkani Campaign' is meant to expose the 'financial barrier' put in place to exclude deserving students. 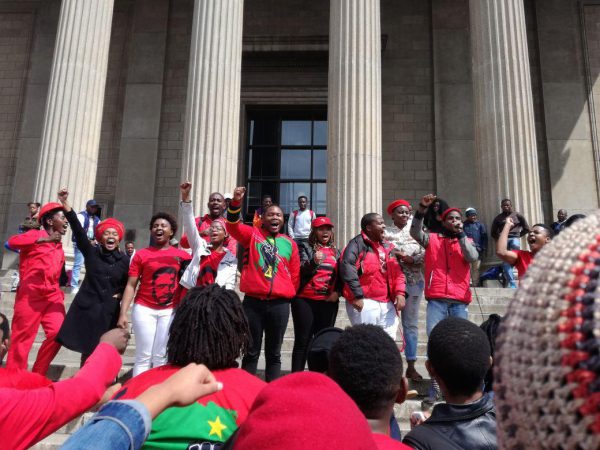 Leaders of EFFSC at Wits University celebrate their landmark victory in SRC elections with their supporters at the steps of The Great Hall (Pic: @WitsEFF Twitter)

The Economic Freedom Fighters (EFF) has thrown down the gauntlet to universities across the country, saying it will not accept the ban on walk-in applications for first-year placements and will marshal its members to help people claim the free tertiary education promised last year by President Jacob Zuma.

Higher Education Minister Hlengiwe Mhkize criticised the EFF’s call, which came after Universities South Africa (USAf) said no walk-in applications would be accepted and that all applications have to be dealt with by a central, online “clearing house”.

“There is no way in which a person can walk in and expect to be registered. There is no way to assume that because you have money you can just go to that particular faculty. People have to meet the needs,” said Mkhize.

“We are using all channels so that people understand that announcement did not mean we are changing what is a standard practice in any institution of higher learning be at university or TVET college,” she said.

The EFF said its “Sizofundangenkani Campaign” aimed to expose the “financial barrier” put in place to exclude deserving students, including “ridiculous registration fees” and charges for securing a place in accommodation.

It said: “The year of students abruptly commences with the brutal exclusion of the poor of the poorest academically deserving students being excluded because of systematic financial exclusions by Universities South Africa.”

USAf chief executive officer Ahmed Bawa said the universities are not contemplating applying for an interdict against the EFF.

“We did not have any discussion about that yet. That is also something that we will work out by each university because the EFF does not have a presence at all our campuses,” Bawa said.

Each university will take the necessary steps to try and avoid battles and altercations, he said. There was an incident at the campus of the University of Pretoria (UP) yesterday, but it had nothing to do with the EFF campaign.

Unisa spokesperson Martin Ramotshela said there was an incident at the Sunnyside Campus, but it was not related to the EFF. He said the university reopened for 2018 registration, and because of the long queues and some pushing and shoving, one of the gates came off its rail.

The EFF said the Sizofundangenkani Campaign “encourages walk-ins as a means of bridging the gap between those who have access online and those who do not”.

“We also encourage walk-ins because we know the online application process usually takes time and has a lot of irregularities and cannot be trusted. Fighters will marshal students to different registration centres to avoid stampedes and long queues.”