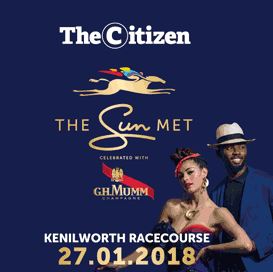 Legal Eagle failed to justify favouritism in the Sun Met two years running but many horse players are betting that he will make it third time lucky when the R5-million race is run at Kenilworth Racecourse in Cape Town this afternoon.

Oh Susanna, the only three-year-old in the field, is 5-1 third favourite after being offered at 10-1 last week.

Whichever way you look at it, Legal Eagle has his rivals stone cold on form unless it all goes wrong for him from the No 13 draw.

But his opposition includes promising types who may prove to be a lot more talented than they have shown so far.

They include the likes of Oh Susanna, who executed the best older females in an 1 800m feature race recently, and four-year-old Last Winter, who would sport an unbeaten record but for a narrow and unlucky defeat last time out.

Betting with TAB on the Met also began to gather pace yesterday and by the close of business yesterday the win, place, swinger, exacta, trifecta and quartet totalled more than R300 000.

The tote favourite yesterday with TAB for the Met was Oh Susanna’s stablemate, African Night Sky, who was paying R6.20 for a win last night.

African Night Sky, winner of the Winter Challenge series at Kenilworth last season as a threeyear-old, is one of five runners from trainer Justin Snaith’s Philippi base in the Met.

Snaith is bidding to win the race for the first time in his career.