'We want thousands and thousands of people to come to this march.' 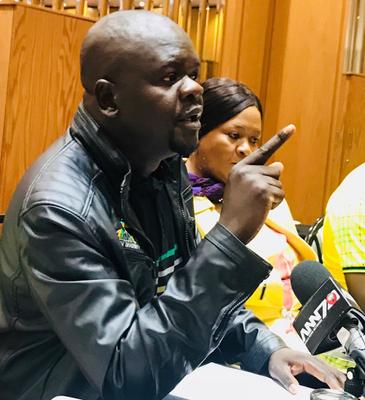 A group of African National Congress members in Gauteng on Sunday announced a “national shutdown” to cripple Pretoria through demonstrations from Monday in a bid to put pressure on President Jacob  Zuma to quit.

The group of “concerned ANC members” from different regions in Gauteng, under the #ZumaMustGo campaign slogan, insisted on Sunday they would use all possible means to get Zuma out of the Union Buildings.

“We are being in the forefront because we love our movement. We love our organisation. Even if it means that we are [going to be] arrested, or beaten, or killed – we are ready for it tomorrow [Monday]. And we are not going to leave the Union Buildings, by the way, until he resigns,” leader of the #ZumaMustGo protest Lazarus Maumela told journalists in Pretoria.

“That is what we are going to do. We have made arrangements… we are sitting with about 60 buses now, and we know that before the end of the day, today [Sunday], we could be having 100 buses [coming to Pretoria]. We want thousands and thousands of people to come to this march. We are also going to be joined by a Pakistani group.”

Maumela vowed that the aggrieved ANC members would pull “the enemy” Zuma physically from the government offices if need be.

“We are coming to the Union Buildings tomorrow [Monday], and we are not apologetic about it. We are ready for everything. We have sat down with the police and all the leaders in Tshwane. We will address the people to say, do not give up on the ANC, we just have one enemy. We will root out that enemy. If it means we have to go the office and remove him, we will do that,” said Maumela.

“We cannot be defeated by a group of thugs, tsotsis, people whose intention is to corrupt this organisation. We are not afraid, even if the BLF [Black First Land First] come, we are ready. If they come with firearms, we will beat them physically.”

The South African Communist Party in Gauteng later on Sunday distanced itself from the protest action, questioning the credentials of the organiser.

The SACP has noted the press conference which claimed that the protest action was sanctioned with the support of the SACP, SACP gauteng secretary Jacob Mamabolo said.

“We strongly condemn acts of anarchy, lawlessness and rampant appetite for destruction and violence.

“We further distance ourselves from the man who claims to hold a position in the SACP who took part in the press conference. The man does not represent the SACP and any of its structures. In fact the man is not known to any structures of the SACP and therefore doesn’t have a mandate to speak on our behalf.”

The leadership of the SACP would conduct a thorough investigation into the identity of the man who claimed to represent the party, Mamabolo said.