We will not be ‘blackmailed’ by Malema, vows DA mayor Trollip

The EFF says its councillors will vote with the ANC in council should the party present a 'credible candidate' for mayor. 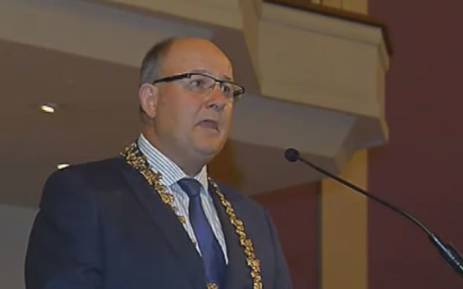 Nelson Mandela Bay mayor Athol Trollip has responded to the announcement made by the EFF on Tuesday to table a motion of no confidence against him in April. Trollip has warned the red berets that the DA will not be blackmailed into supporting any political position that it does not agree with.

This after the EFF instructed its Eastern Cape structures to table a motion of no confidence against Trollip following the DA’s decision to vote against the EFF’s motion on land expropriation without compensation in the National Assembly on Tuesday. The motion was passed by 241 votes with the help of the ANC and smaller opposition parties.

The EFF said its councillors would vote with the ANC at the Nelson Mandela Bay council should the party present a “credible candidate” to replace Trollip.

“We are not going to be blackmailed into supporting any political ideologies or policy that flies in the face of our own. We did that with the UDM, they tried to pressure us not to take certain decisions to protect their members, and we always put principle before personality,” Trollip said in an interview with Power FM on Wednesday morning.

The mayor said the decision to table the motion of no confidence against him was made “out of the blue”, and was unilateral because it was allegedly made by EFF leader Julius Malema alone. Trollip also confirmed that there were no engagements between the DA and EFF.

The DA does not have a coalition agreement with the EFF, but a fragile coalition was in place with the United Democratic Movement (UDM), Congress of the People (Cope) and other smaller parties at Nelson Mandela Bay municipality.

Trollip said the DA was prepared to return to the opposition benches even if it meant persuading residents to vote for the party in the next local government elections with an outright majority to govern the municipality.

“We are not going to be blackmailed by Malema and say ‘either you do this or we will do that’. We have been in opposition, and I have spent my whole life in opposition,” he said.

“If somebody who supported us in the past rejects our adjustment budget in council yesterday [Tuesday] and Julius Malema stands up in parliament and makes a unilateral decision that they will remove me in April, where is the relationship? Am I missing something?”

Trollip has questioned Malema’s motives behind the proposed motion of no confidence. This after the EFF leader said in August 2016 that his party would vote with the DA at the country’s metros because it was the better devil than the ANC.

“He [Malema] has now obviously decided he would like to throw his lot in with the ANC and return Nelson Mandela Bay to the ANC. And in return for that, we will see what he gets.

“There are still two Cabinet posts open, maybe he is eyeing one of those. It is clearly a strategy to get the EFF back into positions of power and patronage in the ANC,” he said.

Parliament votes ‘yes’ on expropriation of land without compensation