MaGigaba-Madikizela said Winnie's grandmother was worried about her marrying a man who was always on the run from the apartheid security police. 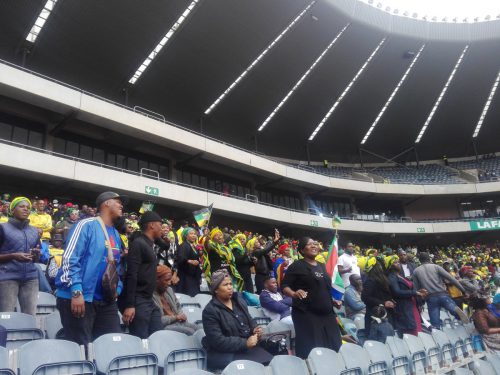 One of the late Winnie Madikizela-Mandela’s relatives, Nomasonto maGigaba-Madikizela, told mourners who came in their thousands to remember the life and times of the late freedom fighter at Orlando Stadium in Soweto that her grandmother initially did not want her getting married to Nelson Mandela.

“Let me touch on how we gave her to Madiba in 1958 – we trusted the person who was going to marry her, she was beautiful. On the day of the wedding, her grandmother, Sane, said to Winnie’s mother, how did you let her get married with someone who comes from emahlathini [strange places]?

“What she meant is that this son-in-law was running away from the police. We saw as the family the way in which Winnie was beginning to live, but the Good Lord we serve made sure that even when Boers beat her up she never gave up. She showed astute bravery in all she did. We thanked all of you for coming here in your thousands and showing that you really liked her,” maGigaba-Madikizela said.

She said Winnie’s earlier political awareness was ignited by her father, the late CK Madikizela, whom she described as a “politician”. She said while attending Mbongweni School, Winnie assumed leadership positions in most activities, particularly “physical training”.

“She was politically aware even at primary school because CK Madikizela was a politician who will go Mthata saying I am going to Bhungeni, when he came back she will run to the father asking for feedback from the father. In the village she will come back for holidays and organise a concert and did not want children scattered all over and wanted to keep them in one place.

“This she continued into her latter life as a social worker and politician, ntoni ya manzi, she was beautiful inside outside. Kusuka into kuthe luhlevano. When we did not have electricity, uNomzamo made sure that we receive electricity and lights in our homes,” MaGigaba-Madikizela concluded.

Grandson Bambatha Mandela told mourners that he thought at 81 his grandmother would continue living. He said she was not only the grandmother but a mother as well. Bambatha said he was the first of the grandchildren Winnie and Nelson raised after Mandela returned from prison.

“Darling, I don’t think I will be able to sleep, and if I do I don’t want to wake up next to my enemies,” Bambatha said this was Winnie’s response to their invitation to their home in the suburbs.

Earlier during the memorial service, ANC supporters heckled family friend Rita Ndzinga as she tried telling them about the hardships Winnie endured in the hands of the security police. When the booing continued, programme director Mokonyane asked her to sing “malibongwe igama lamakhosikazi”.

Mokonyane had her hands full when competing factions within the stadium and ordered that “ubani uzofakaza ngawe” be sung by the ANC Women’s League.