The president arrived in Mahikeng at midday for an urgent meeting with ANC structures in the North West. 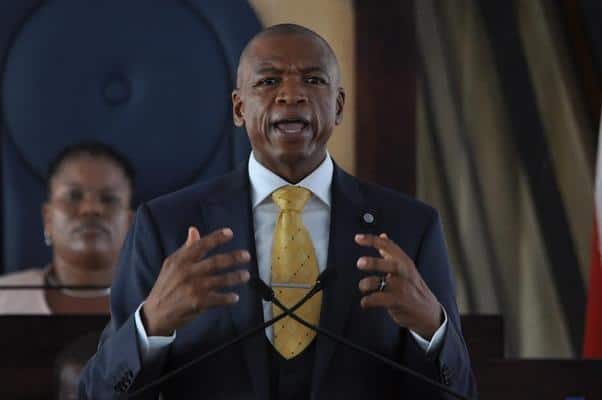 “Ramaphosa must recall Supra. The ANC must be on the side of the people,” said Thapelo Galeboe, the regional chairperson of the Young Communist League in the Dr Ruth Segomotsi Mompati district.

“If Supra is not recalled, the poor and the working class shall see upon themselves to liberate themselves,” he added.

The North West capital Mahikeng has been shut down amid widespread looting and public violence since Wednesday, as calls for embattled premier Mahumapelo to resign grow more intense. Streets have been trashed and buildings and vehicles torched, while the unrest has spread to other towns in the province.

Ramaphosa arrived in Mahikeng Friday at midday, where he was set to have an urgent meeting with ANC structures in the province in an attempt to resolve the ongoing unrest in provincial capital Mahikeng and surrounds.

Ramaphosa cut short his visit to the UK to attend to the violent protests in the North West.

ALSO READ: Cele in Mahikeng amid protests calling for Mahumapelo to resign