Ramaphosa had initially refused to answer the questions, explaining that they were in the courts. 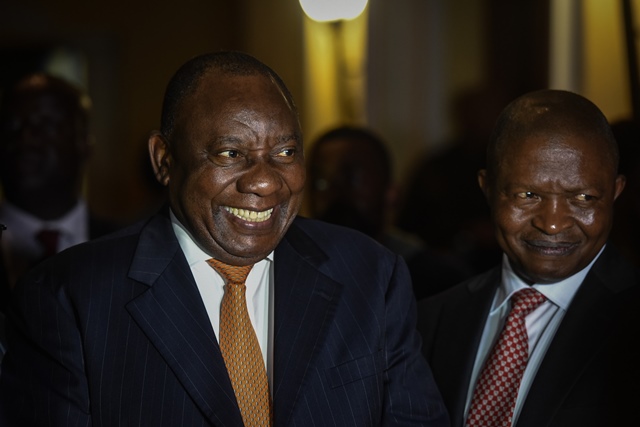 President Cyril Ramaphosa and Deputy President David Mabuza are seen sharing a light hearted moment outside the Skweyiya family's residence during a visit after the passing of Dr Zola Skweyiya to pay their respects, 12 April 2018, Pretoria. Picture: Jacques Nelles

President Cyril Ramaphosa has defended the decision to transfer former director-general of the State Security Agency (SSA) Arthur Fraser to the department of correctional services with immediate effect.

He was responding to a follow-up question by DA leader Mmusi Maimane, who asked why Fraser had been given special treatment by being transferred from SSA to correctional services and whether Fraser would be held accountable.

Fraser faces a court application from the inspector-general of intelligence (IGI), Setlhomamaru Dintwe, who filed papers last month making shocking claims that Fraser had been obstructing the functioning of his office to stop the watchdog body from investigating serious allegations against him.

Ramaphosa said transferring Fraser had been done in consideration of the sensitive nature of the crime intelligence division as well as to make way for and ensure that the review panel that the president would set up thoroughly assessed the structure of the agency relative to its mandate and inquire into its systems and capacity.

The president had initially refused to answer the question, stating that the matter was subjudice as the DA had sought a judicial review of Fraser’s transfer.

The initial question posed by the Cope MP was whether, in the interests of transparency, accountability, responsibility, the rule of law and the best interests of the country, Ramaphosa would establish a commission of inquiry into the alleged serious problems within the Crime Intelligence Division of SA of the SA Police Service.

These problems include dysfunction, malfeasance, corruption and gross abuse of resources of the state, including financial resources, for wrongful ends. The MP then asked, if the president wouldn’t establish the inquiry, why not? and if he would, what the relevant details were.