Numsa walks out of Eskom wage talks, joins NUM in call for strike

'This means there will be no more talks. We are officially headed for a strike. Trade unions are united in their fight for an increase,' Numsa says. 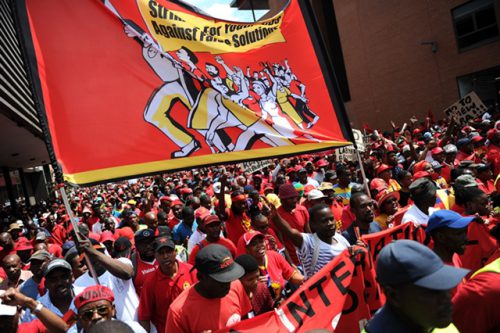 Members and supporters of the National Union of Metalworkers march through Johannesburg on 21 March 2018. Picture: Michel Bega

The National Union of Metalworkers of South Africa (Numsa) today walked out of wage talks with Eskom, saying negotiators of the state-owned power utility had adopted a hostile attitude and were employing bullying tactics to intimidate its officials.

Numsa said that the second round of wage talks broke down because  Eskom brought specialised security armed with high caliber weapons to surround the negotiations venue and that Eskom negotiations team consistently offered a zero percent increase without providing audited financial statements to them.

Eskom workers are demanding a 15 percent wage increase across the board in a one-year agreement, 80/20 percent contribution to medical aid, R2,000 increase in housing allowance, a ban of labour brokers, and paid maternity leave of six months and a one-month paid paternity leave.

Phakamile Hlubi-Majola, Numsa’s national spokesperson, said Eskom has demonstrated only extreme arrogance towards the union’s members and their employees.

“They have shown that they do not care about workers and their families. They are only concerned with enriching those who are politically connected to the governing party,” Hlubi-Majola said.

“Eskom management has also confirmed that they have declared a deadlock with us for refusing to accept the zero percent wage offer. This means there will be no more talks. We are officially headed for a strike. Trade unions are united in their fight for an increase and refuse to be blamed for the financial losses caused by corrupt managers at the state owned entity.”

Numsa agreed with the National Union of Mineworkers in mobilising all their members and all workers to embark on a complete shutdown of Eskom if they continue to refuse to engage meaningfully with their demands.