The deceased were later identified as two men from Bhekuzulu, in KZN. 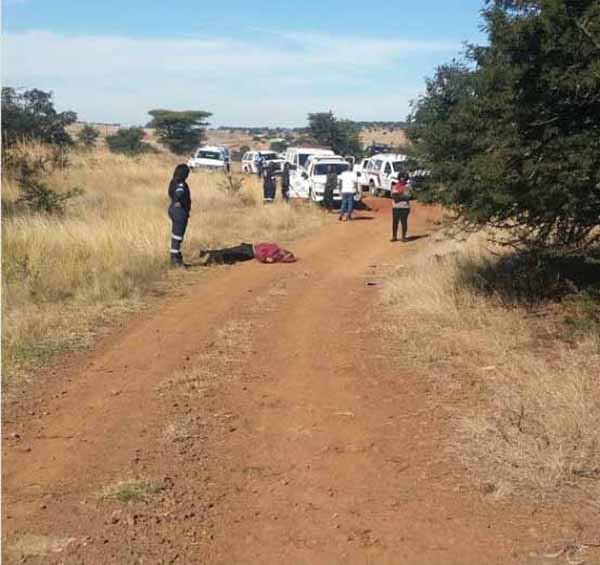 One of the murder victims lies on a gravel road. Image: Vryheid Herald

Two men were found shot dead, execution-style, near a railway in Vryheid East (on the Melmoth Road side), KwaZulu-Natal, on Saturday morning, Vryheid Herald reports.

A man who was walking along the area at about 10am on Saturday discovered the two bodies.

The man then contacted the police, who went out to the area and found the bodies of both men on a gravel road.

The two were later identified as Lucky Yaka and Lindokuhle Sangweni from the New Stands area in Bhekuzulu.

Lucky had a wound to his head and another to his shoulder. Lindokuhle was shot four times behind the left ear.

It is believed that a 9mm pistol was used. Live rounds, three projectiles and two cigarette butts were found on the scene.

The motive for the murders is currently unknown. SAPS also do not believe this was a robbery, as both men still had their possessions with them.

After some investigation, it was found the two were last seen alive at about 9.30pm on Friday evening, and they had claimed to be off to rest for the night.

Two murder cases have been opened.

No arrests have been made yet, and community members who might have any information that could lead to arrests are requested to contact Warrant Officer Jethro Khumalo on 083 952 4545 (all will be treated confidentially).

SAPS spokesperson Thulani Zwane also urges anyone who might have information to come forward.

“The motive for the killing is still unknown at this stage. We are investigating and appealing to anyone who might have information regarding this incident to come forward and give us information that could lead to the arrest of the suspects,” he said.