The 'Rhino Coin' cryptocurrency will fund the Rhino Coin Foundation, which will work towards protecting rhinos and benefiting communities surrounding rhino reserves. Alexander Wilcocks, a founding member of the Rhino Coin, explains how the Rhino Coin will be used to conserve rhinos. Photo: Laura Pisanello

A new cryptocurrency was launched in Bryanston recently, which will aid in the conservation of rhinos, Sandton Chronicle reports.

The currency, called Rhino Coin, will contribute to a foundation called the Rhino Coin Foundation, and the two will work together to both fund and aid conservation efforts.

With the vast amounts of funding required to safeguard, sustain and maintain, let alone grow a rapidly dwindling rhino population, Rhino Coin’s key motivation is to create a steady and significant source of revenue for rhino conservation.

Dr Johan Marais, a renowned veterinarian and director of the foundation, said that in the last five years, every year, 1 000 rhinos are lost to poaching, an unsustainable figure that will soon lead to their extinction. 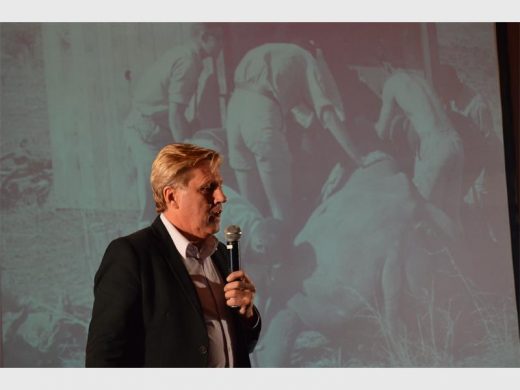 Braam Malherbe, a conservationist who is also on the board of the foundation, highlights how Rhino Coin will aid rhino conservation. Photo: Laura Pisanello He said that rhino horn is considered a sign of wealth, and many people are banking on the extinction of rhinos in order to make their horns an even more valuable commodity.

Marais also highlighted how expensive conservation is. A male rhino that had his horn brutally removed required intensive treatment to save his life. Just one treatment costs over R40 000, and multiple treatments were needed.

The benefits outweighed the cost, however, as the rhino has now bred with two females, ensuring that at least one lineage is not lost to poaching.

Braam Malherbe, a conservationist who is also on the board of the foundation said: “We are faced with a huge challenge, and we need to change our thinking. We can either be an asset or a liability.

“It’s time to stop talking about what we should be doing and do what we can. We can either be part of the problem or part of the solution.”

Alexander Wilcocks, a founding member of the Rhino Coin said: “Rhino Coin is cryptoconservation, which means its cryptocurrency with a conscience. We combine the transparency and security of blockchain with the social responsibility of conservation.” A panel discusses the impact that Rhino Coin will have on conservation efforts for rhinos. Photo: Laura Pisanello

Wilcocks added he believed that blockchain was a new channel to facilitate services. “It is a platform that allows concepts to build and function off of.”