Jacques Pauw has joined others in questioning why the EFF chairperson seems hellbent on preventing the suspended Sars boss from being investigated. He said there could possibly be a link between Moyane and the Economic Freedom Fighters (EFF) due to Moyane having allegedly improperly helped illegal cigarette kingpin Adriano Mazzotti, while Mazzotti is also known to be a funder of the EFF (in the photo above, he can be seen on the left of Malema). Another photo of Malema with Mazzotti (on the left).

Pauw asked: “Why is Dali Mpofu committing hara-kiri [suicide] in defending Tom Moyane? Is it because they have a common friend: tobacco-man Adriano Mazzotti? Under Moyane, Mazzotti’s R600m tax bill disappeared. He also paid EFF registration fee in 2014 and gave Malema a loan to help pay his SARS bill.”

Why is Dali Mpofu committing hara-kiri in defending Tom Moyane? Is it because they have a common friend: tobacco-man Adriano Mazzotti. Under Moyane, Mazzotti's R600m tax bill disappeared. He also paid EFF registration fee in 2014 and gave Malema a loan to help pay his SARS bill.

Mazzotti once told City Press he had given Julius Malema’s party R200 000 to register themselves, though there are allegations that he has given the party, and Malema, much more money. Mazzotti has also been linked to other underworld figures such as Glenn Agliotti and features prominently in Pauw’s book.

Pauw wrote in his book that Nkosazana Dlamini-Zuma’s campaign to become the ANC’s next president was partly being funded by Mazzotti, whom Pauw described as a tobacco smuggler. According to an affidavit in Pauw’s possession, Mazzotti had admitted to bribing public officials, laundering money and committing fraud. He is director of cigarette company Carnilinx, which is still under investigation by Sars for smuggling and tax evasion.

Pauw was also critical on Wednesday of Mpofu for demanding that constitutional law expert Professor Pierre de Vos withdraw a critical blog post about him before noon today – a demand that De Vos, who is currently abroad, in effect laughed off. Pauw characterised it as suggesting Mpofu might have smoked something powerful – a clear reference to not only drugs but the cigarette business that may link it all.

I seriously doubt Dali Mpofu's legal acumen and common sense. Gave Pierre de Vos a 12h00 deadline to remove insightful piece about Mpofu’s blunders at SARS commission. If not, says Mpofu, expect legal action. Huh Dali, what have you smoked? You and Tom and Adriano and Julius?

Pauw is not the only well-known journalist to criticise the Mpofu-Moyane relationship. Max du Preez, over the weekend, was among those questioning Moyane’s decision to employ Mpofu, calling it a potential conflict of interest arising from Sars investigating how Malema had paid his R18 million tax bill in 2014, with News24 alleging that “impeccable sources” had found Mazzotti to be a particularly generous financial donor to allow Malema to repay his tax bill.

It emerged during the Nugent inquiry into misconduct at Sars that former tax executive Jonas Makwakwa, thought to be Moyane’s right-hand man, allegedly halted the inspection of cigarette companies, according to testimony given by ex-Sars employee Gene Ravele.

Mpofu, acting on behalf of Moyane, on Friday called for the Nugent inquiry to be halted altogether, in an interesting turn of events, considering that Moyane himself initially called for the inquiry to take place. Malema, too, had initially been critical of Mpofu’s decision to defend Moyane, only for him to last week unexpectedly lend his support to Mpofu’s attempt to have the investigation of Moyane halted.

Mpofu on Friday requested that all testimony given over the first three days of the inquiry be expunged from the record, claiming the evidence given had been unfair and unlawful. 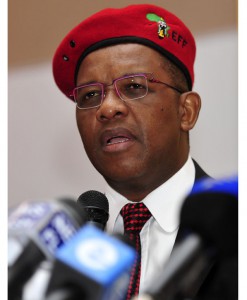