The radio personality shortly thereafter found Metro cops, who promptly did nothing. 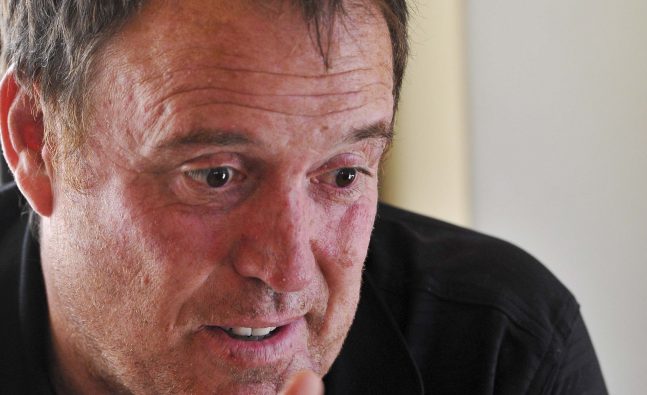 Radio personality Darren Scott has taken to social media to share his terrifying experience in peak-hour traffic this week, reports the Fourways Review.

On Thursday, Scott was making his way home when he was confronted at 7.15pm at the William Nicol Drive and Leslie Avenue intersection by three “aggressive” men.

“This has been called a hijacking hotspot for a while now, yet there is nothing one can do if you are targeted! The traffic is still fairly heavy, with cars to the left and right of you and in front and behind. You’re trapped!  It’s probably why they target these intersections,” Scott wrote.

“The guy with the 9mm, which he held to my head, was extremely aggressive, constantly swearing and screaming at me. I wouldn’t recognise him or his accomplices if they walked into this room right now. All I could see was a 9mm in my face, with a very twitchy finger on the trigger.”

Scott explained that he was thankful he had listened to advice from experts about how to respond in these situations – stay calm, don’t resist and give them what they want. However, the three men did not make this a straightforward task.

“Every movement I had to make, to give them what they demanded, was met with an increasingly aggressive gunman screaming at me to keep my hands where he could see them. All three tried to pull my ring off my finger.

“My laptop was in a satchel under my seat behind me. I wasn’t allowed to say anything to them without being sworn at and told to ‘shut the f*** up’, so trying to explain how I was going to get my bag was pointless. As I reached back for this, I thought I was going to be shot, there and then!

“It wasn’t the first time this thought crossed my mind. It was all I could think of while trying to remain calm. That, and how my two boys were just a few kilometres up the road waiting for their daddy to get home. I managed to pull my bag from behind my seat and give it to them.

“Once they had what they wanted, two of them bolted but the gun-toting one stayed – the gun now pushed closer against my head. Again, I feared the worst. He had so much aggression and hatred, I thought that was going to be his final action.

“When he screamed at me to ‘drive off you piece of s**t’, I knew that it wasn’t. Yet, somehow, in the confusion, my gear had been knocked into neutral, and my auto-handbrake had engaged. In my panic to get away, as I fumbled to get my car moving, he grew even more agitated. Fears grew even more; all I could think of was that he was so agitated that his finger on the trigger was one sudden movement away from firing.

“I got the car going and, shaking uncontrollably, somehow managed to drive off without causing an accident. What happened next made me realise even more how much trouble we’re in when it comes to wiping out this kind of crime off our streets in this city.”

Scott drove a mere 100m before noticing three Metro police vehicles parked on the other side of William Nicol Drive.

“It was dark, so probably too far away for them to have witnessed my incident and react – in all fairness. However, as both intersections are known hotspots, why weren’t they split up to monitor both intersections?” he wrote.

He made an illegal U-turn to reach the police vehicles and informed three Metro cops, standing on the sidewalk, of his ordeal.

“I ran to them shouting that I had just been robbed at gunpoint. When I got to them, I pointed out the intersection just 80-odd metres away – no reaction!

“It was literally a minute since I had driven away from the gunman, yet the cops didn’t move an inch. Instead, they asked some very irrelevant questions, instead of jumping into action. After a few minutes of literally begging them to do something, I knew by then that the robbers would be long gone. It was as if my ordeal was interrupting their conversation and was an irritation to them.

“They eventually, reluctantly, ambled to their vehicles and drove off, heading in three different directions without even taking any contact details from me or telling me what I should do; they couldn’t be bothered that someone had just had a gun shoved in his face, let alone that I had lost everything in my possession.

“Stunned, I got in my car and drove around, not knowing what to do. Then I headed home, just thankful that I would see my boys again.”

When Scott reached his home, he broke down at the sight of his two children.

“Their happy, smiling, innocent faces broke me. They live in a world where the hatred and horror of an ordeal like this just doesn’t exist; they see the good in everyone and everything; they see no colour and are oblivious to the serious problems this country has.”

The following day, Scott made his way to the Douglasdale Police Station to report the incident and was surprised by the service he was met with.

“On Friday [6 July], after a difficult night trying to process what had just happened to me, I made the trip to Douglasdale [police], only because of the mandatory 24-hour report limit, but with little hope for any action.

“If I had any faith in our police before, I had absolutely zero now. I reluctantly made my way there simply to get the necessary paperwork done. How surprised I was!

“The empathy, friendliness, urgency and efficiency of the Douglasdale [police] was more than surprising; I was stunned! Tash and I were welcomed at the door. Once the welcoming lady heard what we were there for, her first response was to convince Tash to force me to go for counselling, and that they would offer this as a complimentary service!

“I was then immediately taken to a Constable Nemukula, who, after a long shift already, did everything in his power to show empathy and understanding for what I had been through. Always engaging, smiling, chatty and friendly as he efficiently did the admin and assisted wherever he could with mine.

“Trips to police stations are normally seen as dreaded excursions, dealing with disinterested staff. This was the complete opposite! The process felt like it took just a few minutes and, in the end, we were made to feel genuinely cared for.

“Within a few hours after getting home from the station, I had an SMS with a case number and, this morning I received another, informing me of my investigating officer’s name, Constable Lephale, and her contact number.

“Literally a few minutes after the SMS, she called me, commiserating with me over my ordeal, reminding me of the counselling necessity and assuring me that she would do everything in her and her colleagues’ power to investigate and keep me informed of any leads or progress and that I could call her anytime I needed her assistance or advice. Again, genuine understanding, empathy and efficiency.

“My trauma aside – what damage the [Metro police’s] bad apples do to our collective psyche regarding crime in this city – the attitude of the amazing people at Douglasdale [police] should give us hope.

“If only all our crime fighters had this attitude,” he finished.

Douglasdale police have been contacted by the Fourways Review and are yet to provide comment.