Metro closes in on Chatsworth druglords

After being disbanded in 2010, the team, who fall under the wing of Metro Police, vowed to make a difference regarding the rapid escalating drug scourge in the community. 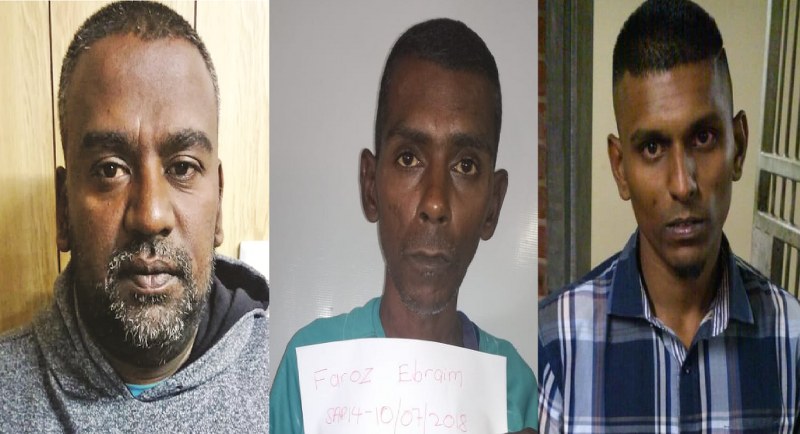 The accused, Brian Radhakishun, Faroz Ebrahim and Jody Ramsagar who were allegedly found in possession of drugs.

The Multi Operational Response Team’s narcotics division has taken a zero-tolerance approach to curbing the drug issue in Chatsworth to another level, after they were brought back into the area by acting deputy commissioner of metro police, Sbonelo Wiseman Mchunu and deputy mayor Cllr Fawzia Peer.

After being disbanded in 2010, allegedly with no reason provided to them, the team, who fall under the wing of metro police, vowed to make a difference regarding the rapid escalating drug scourge in the community, reports Rising Sun Chatsworth.

In four days, four arrests were made and about R229 300 worth of drugs were taken off the streets of Chatsworth. The first arrest was of a pregnant woman in Croftdene on Thursday.

The 26-year-old was allegedly keeping the drugs for her boyfriend. She was caught with 18 bags of crystal methamphetamine with a street value of R1 800.

Kireshni Narainsamy was charged with being in alleged possession of drugs and appeared in the Chatsworth Magistrate’s Court on Friday. She was released on bail of R1 000.

Phoenix resident Brian Radhakishun, 42, was arrested outside a food outlet on the Chatsworth Main Road in Umhlatuzana on Saturday.

He was allegedly found in possession of 11 150 heroin capsules with a street value of R223 000 and was charged with dealing in drugs. He appeared in the Chatsworth Magistrates’ Court on Friday, and was remanded into police custody. He will reappear in court for his formal bail application on July 11.

The third arrest was that of a 40-year-old man from Summerfield Road in Bayview. Faroz Ebrahim was arrested on Lenny Naidu Drive after he was allegedly found to be in possession of 100 heroin capsules, with a street value of R2 000.

He appeared in the Chatsworth Magistrate’s Court on Monday. and remanded into police custody until his formal bail application on July 16.

25-year-old Crossmoor resident, Jody Ramsagar was arrested in Palm Road in Croftdene with 25 bags of crystal methamphetamine. The street value of the drugs amount to R2 500.

He appeared in the Chatsworth Magistrate’s Court on Monday. He was released on bail of R8 000. He will reappear in court on October 1.

Commander of the Metro Police Dog Unit and the Multi Operational Response Team, Spt Rosh Prem, said all the arrests made by the team will eventually make a difference and impact on the community.

“We acknowledge, appreciate and praise the dedication and commitment which the team has shown. It is highly commendable. We look forward to working with the community and assistance from the community is vital for successes such as these and in order to decrease the use of drugs and peddling of drugs in the community,” added Superintendent Prem.

“We hope the unit is not disbanded like they were eight years ago. The team must be provided with more resources to be even more effective to ensure the reduction of the supply of drugs, which are causing havoc in our communities. Drug dealers must be arrested and convicted,” he said.