An urgent interdict puts paid to directives that many legal experts dismissed as evidence that the public protector does not understand her job. 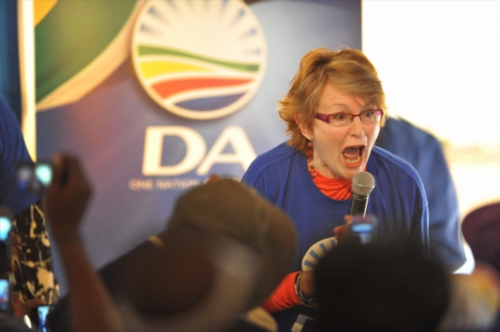 Western Cape premier Helen Zille has obtained an urgent interdict suspending Public Protector Busisiwe Mkhwebane’s directive that the Speaker of the Western Cape legislature must “take appropriate action” to hold her accountable for her controversial tweets about colonialism.

Judge Norman Davis granted an order interdicting the Speaker from implementing the remedial action recommended in the Public Protector’s report of 11 June pending the final determination of Zille’s application to review and set aside Mkhwebane’s findings and remedial action.

Mkhwebane and the Speaker did not oppose her application for interim relief.

The Public Protector’s report followed a complaint by an ANC member of the Western Cape provincial legislature, Khayalethu Magaxa, about Zille’s tweets concerning colonialism on her return from a trip to Singapore in 2017.

In one of the tweets, Zille stated that “for those claiming legacy of colonialism was ONLY negative, think of our independent judiciary, transport, infrastructure, piped water etc.”

READ MORE: Putin tried to save Zuma through Twitter, but failed – Zille

Mkhwebane found that Zille had violated the Constitution and the Executive Ethics Code and that her tweets brought back a lot of pain and suffering to victims of apartheid and “celebrated the oppression, exploitation, racism and poverty which were the direct result of the legacy of colonialism”.

She found that the tweets divided society on racial grounds, were offensive and insensitive to a section of the South African population and was likely to cause racial tensions, diversions and violence in South Africa.

In court papers Zille vehemently denied that the tweets could be interpreted in the way Mkhwebane and Magaxa did and said the tweets, read in context, expressed her view that in spite of the overall negativity of colonialism, its legacy had nevertheless left us with some benefits.

“I did not state, and do not believe, that colonialism is worthy of celebration … I recognise that colonialism and apartheid subjugated and oppressed the majority in South Africa and benefited a minority on the basis of race.

“This is indeed indefensible and I do not support, justify, praise or promote it in any way”.

Zille said she had apologised unreservedly after realising that her tweets had been misunderstood and unwittingly caused offence, but insisted that she was entitled to make the tweets in the exercise of her right to freedom of expression.

Zille maintained the Public Protector’s findings were unjustified and unlawful and it would have a chilling effect on freedom of expression and political speech in the country if her remedial action was implemented.

“It is no exaggeration to say that our democracy, and the culture of vigorous and open dialogue and debate that is vital to sustain it, will be harmed by the implementation of the Public Protector’s remedial action,” she said.