The situation calmed down earlier on Monday morning, but has since turned violent. 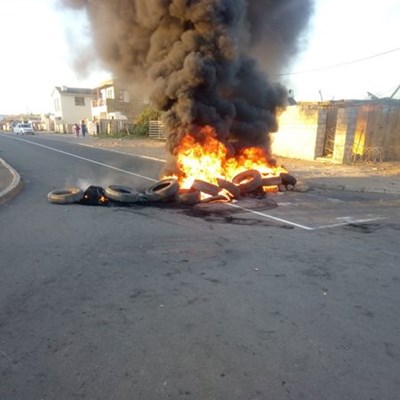 Tyres burning on Adriaans Road in Asla Park this morning.

The situation in Asla Park has deteriorated with a number of informal dwellings having been torched in the informal settlement close to the Dana Bay intersection, Mossel Bay Advertiser reports.

According to police spokesperson Sgt Kapp, the public order policing unit is on the scene and rubber bullets were fired to disperse the crowd.

A number of the vigilantes were noticed as they made their way down Adriaans Road in the direction of Mayixhale Road.

The situation remains tense and residents are reminded to proceed with the utmost caution should they need to travel to and from Dana Bay, Asla Park or KwaNonqaba.

Provincial Traffic implemented road closures as precautionary steps, as vehicles were being stoned and burning tyres are obstructing roads.

Roads were reopened, municipal manager Adv Thys Giliomee confirmed, but as the situation has since turned volatile, motorists and residents are cautioned to avoid the area.

Affected roads included the N2 between Voorbaai and Dannabaai turn-offs, the N2 at PetroSA, the N2 at the Langeberg Mall offramp and Louis Fourie Road.

Vehicles were being rerouted via Welbedag Road.