The party adopted the school and committed to continue providing it with support. 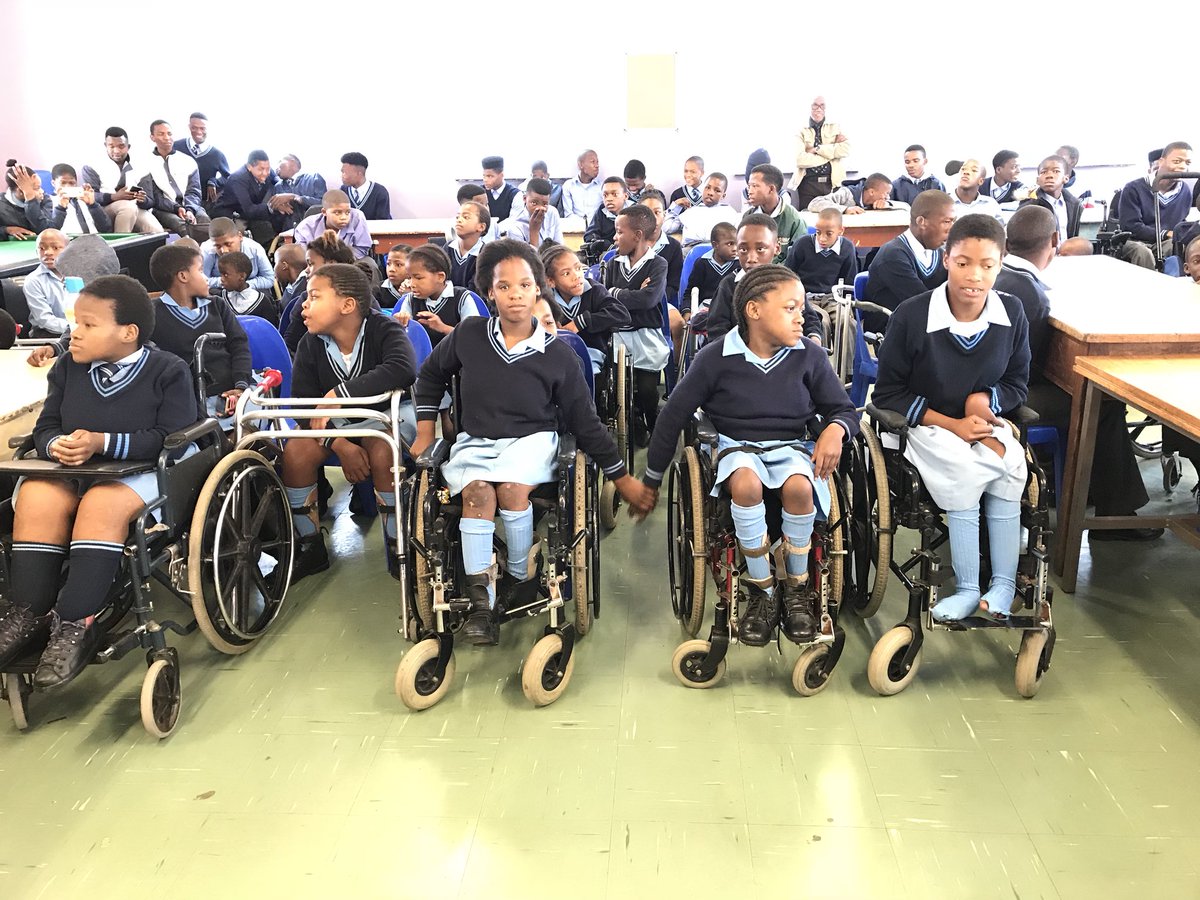 The pupils of Vukuhambe School for Learners with a Challenge gathered to be addressed by EFF leader Julius Malema. Picture: EFF Twitter.

As part of their fifth birthday celebrations, the Economic Freedom Fighters (EFF) visited Vukuhambe School for Learners With a Challenge in East London, where the party made several donations.

The red berets donated four industrial washing machines and 11 specialised wheelchairs, which will be delivered within six weeks, and party leader Julius Malema said the organisation would consider building the school a computer lab.

The EFF leader mocked telecommunications parastatal Telkom for lacking in vision by investing in telephone lines and related infrastructure in the early 1990s when modern society would migrate to digitisation.

“So we must not be like Telkom and not have a vision by teaching kids things that are not going to be relevant in the future like teaching them how to sew,” Malema said.

The EFF committed to building a relationship with the school so the party would continue supporting it.

“Where there is a serious need for anything, you must call us. We don’t have anything, we are the poorest organisation, but we will try to ensure that we support you because we have adopted this school as the EFF,” Malema said.

CIC @Julius_S_Malema urges us to love one another by taking care of each other, as that is the reflection of self love #EFFTurns5 pic.twitter.com/TlQn9Cqgts

The party leader thanked the teachers and the staff members for looking after the pupils of the school.

“We appreciate that it is challenging and sometimes emotionally exhausting, as such we are grateful for you as teachers.”

“In this day and age, we know adults abuse young children, especially those with challenges,” Malema said.

Malema called upon corporate South Africa to support schools such as Vukuhambe to ensure that the pupils have access to adequate facilities.

Unathi Solani, a grade 12 learner giving a thank you speech on behalf of all the learners at Vukuhambe #EFFTurns5 pic.twitter.com/vyToiouZRM

The EFF further committed to renovating the RDP of a local woman living with disabilities, explaining that it could not build a house for the recipient because she did not have a title deed. The woman also received an electronic wheelchair from the party.

The children erupt in song at the excitement of the arrival of the CIC @Julius_S_Malema. #EFFTurns5 pic.twitter.com/vCa84Nkoak

CIC @Julius_S_Malema told the learners at Vukuhambe that the EFF cake will not be eaten at the stadium but will be brought to the school for a mini celebration #EFFTurns5 pic.twitter.com/mfJ9VkO21d