Why taxi owners said the KZN 13 were shot ‘by mistake’

According to the Ivory Park Taxi Association, the real target of the biggest mass murder since Marikana wasn't even in the taxi. 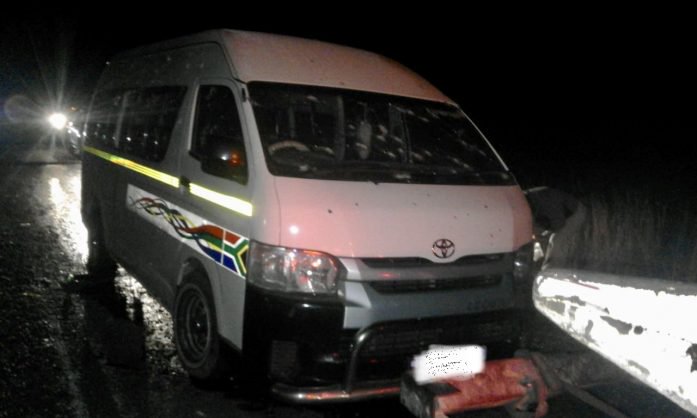 The taxi in which 13 people were murdered.

Ivory Park taxi drivers attending the memorial service of their colleagues who were shot and killed in KwaZulu-Natal clarified what they meant when they said the deceased were “shot by mistake”, reports the Midrand Reporter.

It was a claim that was first made by the Ivory Park Taxi Association shortly after 11 people (which rose to a total of 13 later) were killed on Saturday night, July 22, when unknown assailants opened fire on the minibus taxi they were travelling in near Colenso in the KwaZulu-Natal midlands.

About 250 cartridges were found at the scene. It was the biggest single murder since the Marikana massacre in 2012.

They were on their way back to Gauteng from the funeral of a colleague, Nkosi Mthembu, who was among three people who’d been gunned down in Tembisa on 11 July while seated in his brand-new Toyota Quantum.

At the memorial service at Rabie Ridge Community Hall on 26 July, taxi drivers who agreed to speak on condition of anonymity claimed the gunmen were linked to Mthembu’s murder, and in KZN they had been looking for one man alone –and he hadn’t even been in the taxi.

“The gunmen were looking for Mthembu’s right-hand man. He changed vehicles with the deceased before returning to Gauteng. It was a big mistake and innocent people were killed. We are not afraid because we have nothing to do with the conflict. This was a very sad mistake. Those boys were still young and didn’t know anything. They were just going to bury their boss,” claimed the taxi drivers. Family members at the memorial service of the taxi drivers killed in KwaZulu-Natal.

“We have noted the allegations but we have internally chosen not to act on them. We are trusting the police to investigate the matter. Depending on the outcome of the investigation, should one of the drivers be implicated, only then we would take necessary measures,” he said.

A man suspected to be one of the perpetrators behind the killings was granted R5,000 bail on Monday in the Durban Regional Court on Monday.

The magistrate ordered that the suspect not be named or photographed.

It was reported the state did not oppose bail, and, upon granting the bail, the magistrate requested that the suspect report to Sydenham Police Station every Wednesday.

When the accused appeared in court previously, his defence alleged that police had assaulted him.