Nxasana ‘didn’t know’ he had received a golden handshake

Despite what could be seen as a damning ruling by the ConCourt, the former NDPP says he feels 'vindicated' by the judgment. Former NPA head Mxolisi Nxasana has pleaded innocent after the Constitutional Court ruled yesterday that his removal as national director of public prosecutions (NDPP) was unconstitutional, and that he must pay back R10 million of the R17.3-million “golden handshake” he received from Jacob Zuma in return for vacating his position so Shaun Abrahams could replace him.

“I made it very clear that firstly, I didn’t know that it was a golden handshake, and secondly, I didn’t know it was improper, but in hindsight, when I sought the opinion from my legal team, we all agreed that the settlement agreement was invalid,” he told Talk Radio 702.

Following Justice Mbuyiseli Madlanga’s ruling on Monday, Abrahams will be forced to step down as NDPP, with President Cyril Ramaphosa given 90 days to appoint a replacement.

While many expected Nxasana to return to the position if his removal is found invalid, Madlanga ruled that although this would usually be the outcome legally, in this case, “exceptional circumstances” allow him to deviate from this rule, prompting him to rule that a new NDPP must be appointed.

“For years, there’s been instability in the office of the NDPP. With the court challenge of Nxasana removal from office and to the appointment of Advocate Abrahams, that instability persists to this day. The sooner it is brought to an end, the better,” Madlanga said.

Despite this, Nxasana claims he has been “vindicated” by the ruling.

“Remember, I appealed the decision at the North Gauteng High Court, my appeal was upheld in that regard, and it had become apparent to me that the president did not want me anymore, and we mustn’t lose sight of what had happened to my predecessors.

“A person who comes to mind is Advocate Vusi Pikoli,” he said.

Nxasana remembered how Pikoli was forced out of his role as NDPP, seeing parallels in his own situation. “He was subjected to a disciplinary inquiry in which he was cleared. But it didn’t end there because there was this willingness to get rid of him, and I can imagine the humiliation that he was put through,” he said.

Some have taken to social media to declare their opinion that Pikoli should return to the post. However, he took to Twitter to explain that he had no intention of returning to the NPA. 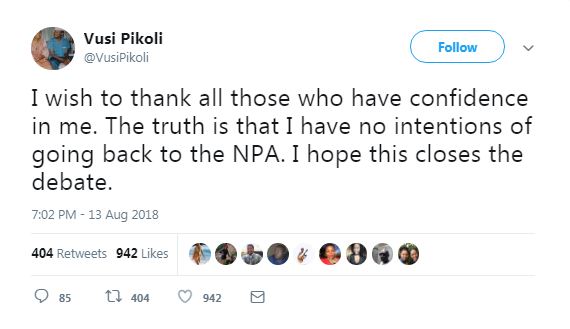 Former public protector Thuli Madonsela has also been the subject of a social media campaign, with many suggesting she would make an ideal replacement for Abrahams as NDPP.