Bonginkosi Khanyile demands amnesty from the president, after he was convicted of public violence by the Durban Regional Court last week. Bonginkosi Khanyile, with raised fist, on the lawns of the Union Buildings, in the hopes of speaking to President Cyril Ramaphosa to ask for a presidential pardon regarding the public violence charges against him. Khanyile is being accompanied by fellow EFF Student Command members and his mother, Phumzile Khatini, who travelled from KwaZulu-Natal to join her son, 21 August 2018, Pretoria. Picture: Jacques Nelles

With mattresses and blankets in hand, #FeesMustFall activist Bonginkosi Khanyile arrived at the Union Buildings lawns yesterday, accompanied by his mother and members of the Economic Freedom Fighters Student Command.

Khanyile, who will be staging a camp out on the lawns, was convicted last week for his role in the student protests of 2016.

Khanyile, together with several student activists also convicted for their participation in the #FeesMustFall campaign, are demanding amnesty from President Cyril Ramaphosa. Some students are still serving sentences, despite higher education being made free, in part due to their efforts.

Durban University of Technology graduate Khanyile plans on camping at the Union Buildings, along with his 59-year-old mother, until Ramaphosa comes to address them. 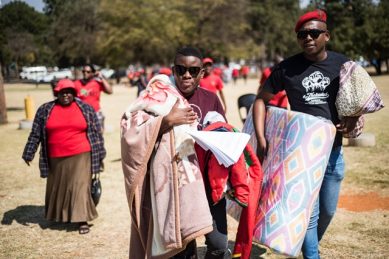 Bonginkosi Khanyile arrives at the Union Buildings with his mother, in the hopes of speaking to President Cyril Ramaphosa to ask for a presidential pardon in regards to the public violence charges against him, 21 August 2018, Pretoria. Picture: Jacques Nelles

He was found guilty of public violence by the Durban Regional Court last week for using a “dangerous weapon” – aiming a slingshot at police during the 2016 violent protests.

At the lawns, activists and members of the public signed a petition requesting a suspended sentence for Khanyile as “he is a first-time offender and no one was injured from his acts”.

Upon their arrival at the Union Buildings, the gates were locked. According to a security official, they were instructed to lock the gates as a protest was expected.

Khanyile said: “Locking gates and closing everything shows the attitude of the president and his office collectively. We are holding a clear revolutionary spirit.

“We call upon everyone, wherever they are, or however small they are, to demonstrate and ask the president to pardon us.

“I was told a slingshot is a dangerous weapon – against armed police officers.

“What is surprising is that in the protest I was arrested in, there is no one that had an injury but they had 13 cases against me. It shows the attitude of the state.”

His mother, Phumzile Khathini, said she wanted to see justice being done and accused the justice system of releasing criminals and incarcerating innocent youth.

Khanyile is set to be sentenced on October 16.

On Friday, Mcebo Dlamini, a former Wits University student who also served time in prison in 2016, walked to the Union Buildings from Johannesburg.